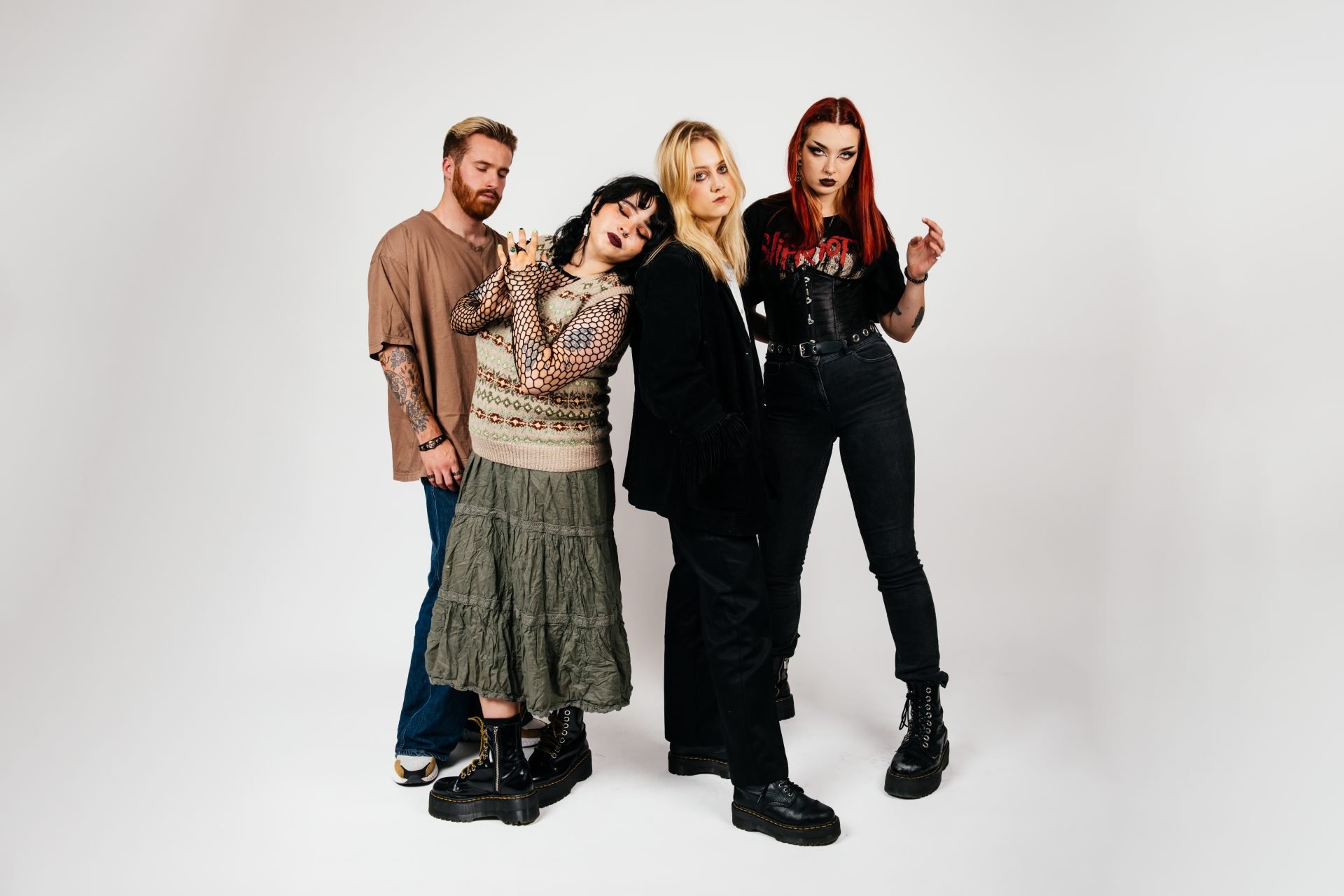 WITH EACH NEW YEAR COMES THE DESIRE TO REFRESH THE RANKS OF MUSIC’S FRONT LINE. WE’VE GONE THROUGH OUR NOTES, COMPILED OUR LISTS, AND COME UP WITH SOME SUGGESTIONS FOR THE NEW BANDS YOU NEED TO HEAR IN 2023.

Over the past year or so, Crawlers have already made a sizeable splash in rock’s deep end. Now, with a debut album to work towards, it’s less a question of if, and more a matter of when they take over the whole joint.

If anyone deserves a bit of a break, it’s Crawlers. The Liverpool four-piece have been busy all of 2022, and 2023 looks set to be just as mad. But, it’ll take something special to top their parents getting tattoos.

“My mum said she’d get a tattoo if we ever got Number 1. So she has to get a tattoo now!” drummer Henry Breen smirks. After a rogue promise, the band achieved Number 1 on the rock charts with their debut mixtape, ‘Loud Without Noise’. “I think she thinks I’ve forgotten, but I haven’t!”

It’s this kind of anecdote that sums up Crawlers. An affecting energy that carries any who’ll listen away, ‘Loud Without Noise’ brought everything the four-piece had been working on since 2018. Originally a trio consisting of vocalist Holly Minto, guitarist Amy Woodall, and bassist Liv Kettle, Henry eventually joined. After a viral hit with ‘Come Over (Again)’, the rest is history.

But this past year, a whirlwind in all its glory, has helped Crawlers double down on what kind of band they want to be. This is why when the inevitable question on the potential debut album crops up – as it has been in every chat they’ve had this side of ‘Loud Without Noise’’s release – a conversation opens up about their dedication to being the best version of the band they can be.

“’Loud Without Noise’ was a really good moment for us to, off the back of ‘Come Over’, because [that] was the song that made us realise we can do whatever sound we want,” Liv explains. “We took those limitations off of ourselves, and I think ‘Loud Without Noise’ was a really good way for us to experiment with that and push ourselves in that way and prove to ourselves as well like what we’re capable of.”

This is what the coming year is all about for Crawlers. “For me, it’s always at the forefront because it’s a big deal,” Liv mentions on the weight the debut album is having now they’re post-mixtape. “And we want it to be a reflection of us, and we want it to be exactly right, like how we all envision it.” The plans for the future are to balance the pressure “because yes, some pressure is good, but there is a difference between good pressure and just pressure where you get nothing out, and you get really frustrated at yourself. I suppose, for me anyway, it’s always kind of sat there, but it’s not like an impending doom kind of thing.”

Where their past offerings have been as likely to rock out with a sinister smile as they are to step back and let emotion breathe through the corridors of Holly’s mind, for the full-length endeavour they’re aiming for what Henry and Liv refer to as a “sonic thread”. “Especially because our mixtape, the whole point of it was we were doing really different styles all in within the space of six songs,” Henry explains. “And I think with the album, we need to sit down and really understand what we want running through all the songs and what themes, and how consistent we want it all to sound.”

With individual music tastes colliding, Crawlers’ addictive concoction means that “there’s always going to be those crossovers. Even when we were starting the band, and as we’ve sort of grown as people, we still have those core bands that we all turn to for inspiration. But what we don’t want to happen is it just be like, ‘Oh yeah, we want it to sound like ‘Nevermind’’. And then the album literally sounds like that – it wouldn’t be us.”

“Obviously, you want it to come naturally,” Henry adds. “But at the same time, you do need to set yourself up. You can’t just wait for like years and just hope that life falls into place.”

It’s hard to argue that things haven’t been falling into place for the Crawlers crew. After support slots with the likes of My Chemical Romance and Maneskin, their fans are growing in number. It’s this fact that they’ve had to reckon with, thanks to their growing success. “We were very, very close with our fans, interacting with them 24/7 and things like that, but when we were starting out, it was a lot easier to handle because there weren’t so many… And I mean that in like the least assholey way possible!” laughs Liv.

“It’s becoming a little bit difficult to navigate how to still keep that closeness with the fans while sort of keeping that personal barrier,” she continues. “I think that’s something that we’re still kind of learning that we don’t have to be switched on all the time. We can take days off, and you know, there are better ways to handle situations.”

On top of kicking the year off with a US tour, they’re also set to take to the stage at Download this year, a moment that Liv has been waiting for on a personal level for years. “I’ve wanted to go to the Download since I was knee-high to a grasshopper. This is a really big moment for me,” she enthuses. “I think that’ll be interesting because we will be the one that’s not completely like metal, but there are definitely those influences in some of our tracks.”

But they’ve got a potential trick up their sleeve, perhaps a nu-metal version of their breakout cut ‘Come Over’. “Holly keeps telling people that we’re doing it. We told all of our team as a joke at first. We were like, ‘Oh, we’re gonna do a metal version’. But Holly actually went and told fans that we’re doing it,” Liv chuckles.

And as for what that sound is when they’re not prepping for hallowed metal stages? Well, there’s no one answer. Henry reckons they have stumbled across it, but it’s more of a lightning strike brought together by the four of them rather than, say, a familiar sound a la Metallica’s thrash. Plus, it’s something they want to keep toying with. “Next time we get into the studio, I want to do a really weird song that we haven’t done before,” he says. “But then again, I feel like the Crawlers sound just comes from us individually as musicians, no matter what style we do. So I think yeah, we have found the Crawlers sound.”

Taken from the February 2023 edition of Upset. Order a copy below.

Please make sure you select the correct location for your order. For example, if you are in the United States, select ‘Location: US & Rest of the World’. Failure to select the appropriate location for your delivery address will result in the cancellation of your order. Please note: International orders may be subject to import taxes, customs duties, and/or fees imposed by the destination country.