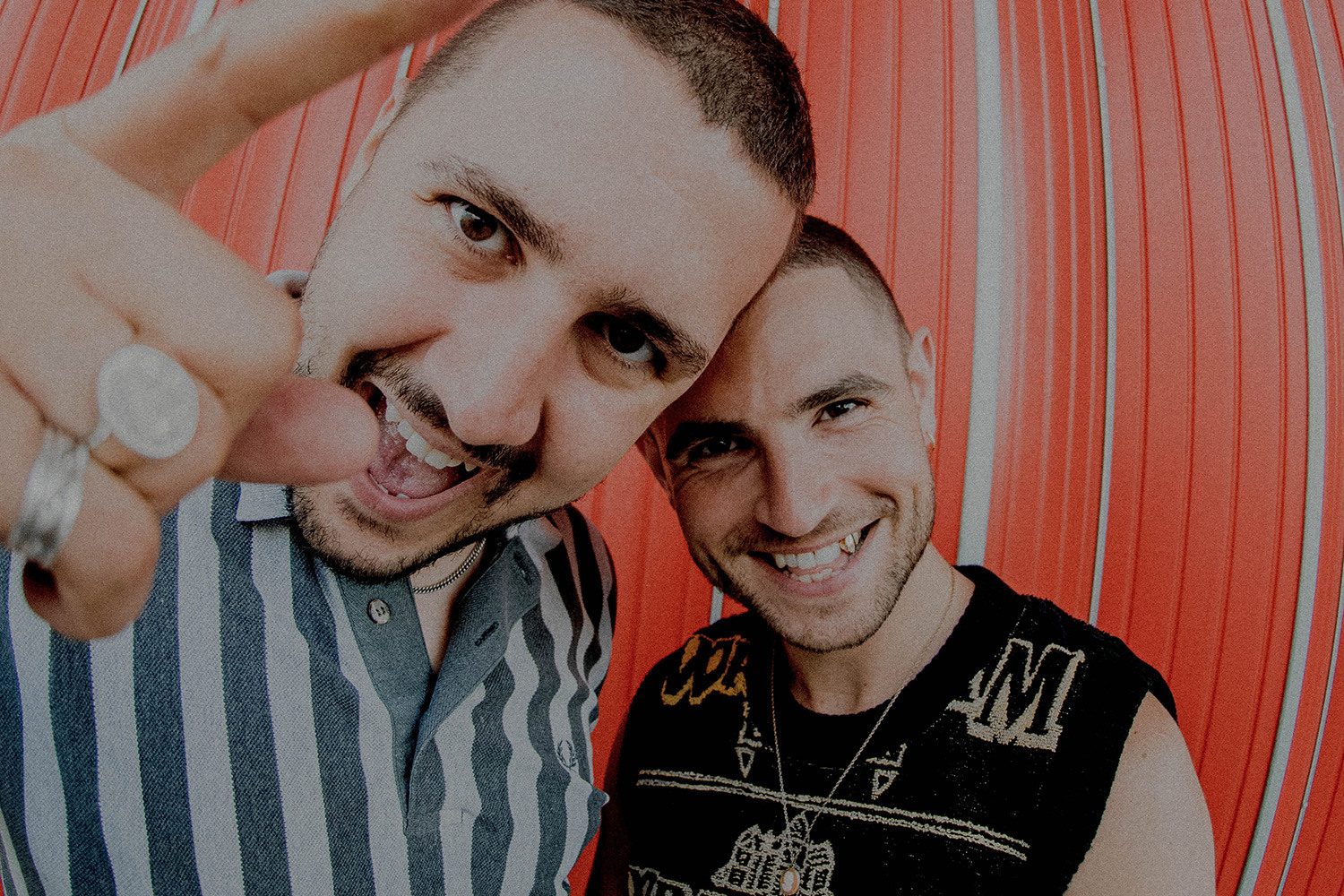 Introduce yourself to Brighton-based duo, Charlie Herridge and Ollie Horner.

Brighton-based duo Charlie Herridge and Ollie Horner – aka SNAYX, pronounced “snakes” – are pushing back, that’s for sure. Speaking out against the misdeeds and wrongs of the world, they’re heading into 2023 all-guns-blazing. The duo fill us in.

What first sparked your interest in music?
Ollie: I started learning guitar with my best mates around 10. We didn’t do much apart from learn things like the James Bond theme or ‘Wonderwall’. I nearly quit, but one day I heard the opening chords of ‘Smells Like Teen Spirit’ on the radio advertising a Nirvana compilation album.
I don’t come from a musical family and wasn’t exposed to the guitar music most of us take for granted, so hearing those power chords blew my tiny little mind, and I practised those chords until my fingers bled.
Charlie: For me, I’ve always been obsessed with music. I wanted to learn guitar at the age of 6, and I’ve always wanted to write songs. At about 8 years old, I formed a band with schoolmates and began writing original songs for us to play. Most were simple pop or rock songs, but then at about 9, I discovered Green Day and the ‘American Idiot’ album. I became obsessed with that American pop-punk sound and began learning every Green Day song I could find the chords for.

Who was your first-ever favourite band or pop star? What did they mean to you?
Ollie: Like Charlie, I idolised Billie Joe Armstrong and Green Day. The ‘American Idiot’ album was my introduction to more politically charged music, and he was a voice for a disenfranchised generation surrounding world events at the time. They also introduced me to skinny jeans, and for that, I’ll never forgive them.
Charlie: Yeah, one of the first really iconic bands that stood out to me growing up was the Prodigy. I remember seeing the video for ‘Firestarter’ on MTV one morning and being both excited and a bit scared. The lyrics were volatile and unashamedly direct, while the explosive drum and bass riffs shook my young brain. Keith Flint’s performance was iconic and the band’s sound was groundbreaking at the time. Still gutted that my mum wouldn’t let me get a matching haircut…

What were your earlier bands like?
We met in college and were in a variety of different bands before SNAYX. Most notably, we were in a bit of an indie boy band together at one point with four-part harmonies… Everyone makes mistakes. But nothing has quite excited us like this project. People really connect with it, and we love pushing to see how the sound will evolve and develop.

What’s been the highlight of your time as a musician so far?
We just played our first-ever European shows at an incredible festival called Left of the Dial. We clashed with some other up-and-coming names and didn’t really know what to expect. But we played to packed rooms on both nights, the crowds were amazing, and the staff and crew were amazing. The level of care and thought that went into the festival was mind-blowing. It was just out of a love and next level of appreciation of live music. I don’t think you’d see it in the UK. We can’t wait to go back.

What would you most like to achieve during your music career?
We’d love to release a full debut album someday, but much more importantly, the greatest achievement we could possibly imagine would be to have bootleg SNAYX merch being sold outside any venue we play. That’s when you know you’ve made it.

What’s the best song you’ve written so far?
We have a song called ‘FAYX’ which we perform live. It’s pure joy and total carnage. We just love ending our sets with it and diving into the crowd to bounce around.

What are you working on at the moment?
We’ve just been in the studio with Jamie Hall of Tigercub, recording some brand-new tracks. They’re both politically charged and reflect the times we’re living in. They hit hard. We can’t wait to release them.

Who do you think is the most exciting band or musician around right now?
Ollie: Bad Nerves. They released one of the greatest debut albums of all time. Something big is about to happen for them. I don’t know what or when, but it’s coming.
Charlie: For me, I definitely think Vukovi are about to explode. They’ve been around a minute, but the new album is killer, and I think the scene is now fully primed for their full takeover.

Music aside, what do you do for fun?
Charlie: Aside from music, it’s tricky because we’re both quite avid gig-goers. I’m quite a big sports fan. I love watching rugby, F1, football, boxing…
Ollie: Yeah, our fun is mostly musically oriented. I do like to stay fit and sometimes go running, but that’s not fun. What is fun, though, is being a cat dad to a young tabby called Buck, affectionately known as Boopis Teenyman. What a guy. Me and his mum are getting matching tattoos for him very soon.

Tell us a secret about yourself?
Charlie: I have a vendetta about people peeling and eating oranges in public. If someone peels an Orange on public transport, everyone is tasting it whether they want to or not. I think it’s really invasive!
Ollie: Every time I eat an orange now, I text Charlie a photo of it – “Thinking of you xx”.
I have a confession. After a night of SNAYX patented BuckBombz (Buckfast + Jäger) and a Chats gig, I ate three raw potatoes in a Belgian Chip shop. Did any workers witness the great potato massacre of 2019? Please get in touch. And always drink responsibly.