The lights dim, ‘The 1975’ (‘A Brief Inquiry version’) plays out and Matty Healy bursts into laughter.

Not too long ago, the idea of The 1975 headlining Reading Festival was laughable. Hell, the last time the band topped the bill at a UK festival, it almost broke them. But things have changed recently and there’s been an air of inevitability around The 1975 headlining tonight. But still, despite the acclaim and the numbers, it feels a touch ridiculous. As the band kick straight into the cluster fuck of ‘People’, it’s pretty clear why.

‘People’ isn’t the sound of a band trying to broaden their appeal. It’s a gang connecting to their roots and remembering when they felt young, invincible and like they wanted to set the world on fire. They never want you to lose that spark. Back in the day, The 1975 played in garages, covered Fall Out Boy and had a whole other existence as the grungy emo thrash of ‘Drive Like I Do’. The music may have changed but The 1975 have always been a punk band.

Thing is, they’ve also always been so much more. When people didn’t listen, they just put their heads down and did things their own way. Before they were the biggest band in the country, they always believed in themselves. And people found themselves in that. It’s why the connection between band and crowd is so electrifying. Tonight, when Matty grabs the camera and sings down the lens, it’s intimate. He’s talking directly to each and every person. Just like he’s always done.

It’s why the rattle of ‘Give Yourself A Try’ feels so uplifting. Matty jumps for joy, unsure what else to do with his body. ‘TooTimeTooTimeTooTime’ sees the group become the most shiny pop band around, complete with dance routines and giddy, infectious choruses. They go where they want. As much as they’ve been leading the conversation in Guitar Bands for years, (we’ve lost count of the number of bands trying to emulate them), there’s really no one quite like them. Name a more bonkers opening trio of songs than is played tonight. Go on, we’ll wait.

Divisive, unapologetic and brilliant, it’s an inspiring celebration of doing things your own way. And they’ve only just begun. 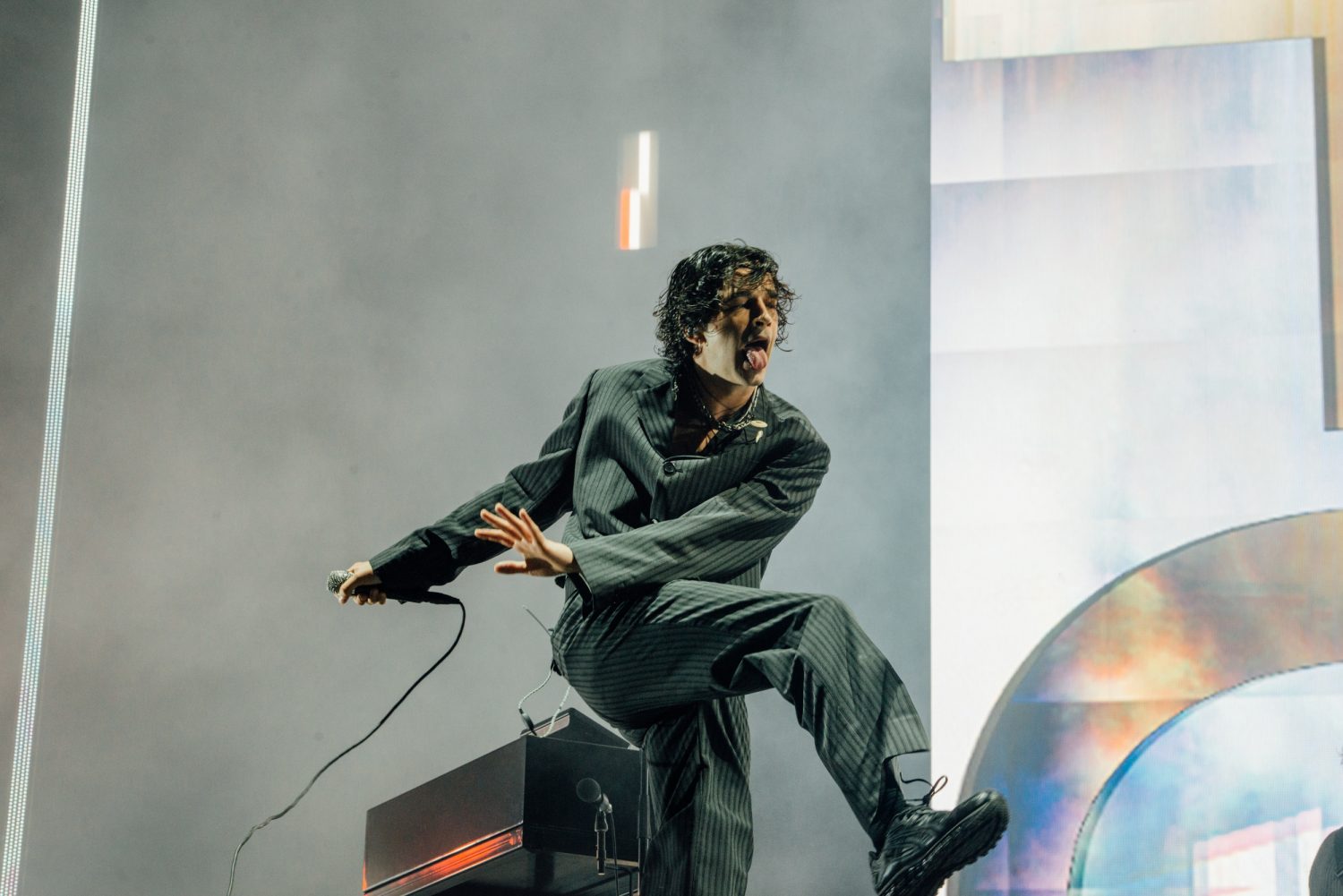 “Please give it up for literally the best band in the world, even if I do say so myself,” declares Matty, introducing The 1975 to the Reading Main Stage properly. It’s a statement that’s tough to argue, as he swaggers down their travellator, fag in hand, for ‘Sincerity Is Scary’. From ‘I Couldn’t Be More In Love’, the heartfelt ode to their fan base, through the classic clap of ‘Change Of Heart’ until the snarling ‘I Like America & America Likes Me’, every shade of the band is celebrated. Time and time again, the band sing of belief in the people before them. It doesn’t matter how they shift, thrash or turn, the crowd stays by their side. “I’ve never felt more affiliated with an audience in my life,” he declares at one point. “We feel incredibly supported tonight, which is the best feeling to have,” he continues a little later. “If you’re in a band and you’re thinking ‘oh my god, that must be so mental to headline Reading’, it is mental.”

And they’re determined to make the years of blood, sweat, tears and toiling their way to the top mean something. “If you’re on this stage and you do nothing more than indulge in yourself, you’re not doing anything for anyone. So we have to stand for things,” he reasons. They spend their big Oasis moment of ‘I Always Wanna Die (Sometimes)’ talking about suicide, and they hand a chunk of their encore over to Greta Thunberg for the latest version of ‘The 1975’ and her message of achievable, urgent change. Matty never leaves the stage. It gives the hopefully spark of ‘Love It If We Made It’ a lump-in-the-throat danger. ‘Sex’, ‘Chocolate’ and ‘The Sound’ burst out with a rapid hunger as the biggest night in The 1975’s life comes to a close. It still feels like they’re only just getting started though.

Turns out the impossible might just be possible after all. All it needs is a little faith. You just need to believe. And tonight, The 1975 tell the crowd of Reading to believe in their band. To believe in each other. And perhaps most importantly, to believe in themselves.