Upset tackles Boston Manor’s Henry Cox backstage at Slam Dunk South for a chat about life since ‘Welcome To The Neighbourhood’, and new music…

You’re on day two of two, how’s that feeling?
We are lucky enough to have done two other Slam Dunk’s in the past; I believe it was our UK festival debut about five years ago when we first did it when we’re just a DIY band. They’ve always been great to us, so we were stoked for this year, and it hasn’t disappointed. I’m proud of the festival for how much it’s grown; this is like the real fucking deal: a big ass, British outlaw festival.

And you’re now main-staging it!
We went from the Introducing stage, to… I can’t remember what it was called… I think it was the Key Club stage? And then we obviously got to the Monster Energy main stage this year, and the crowd was amazing.

How is your progression feeling, especially from DIY to this?
We’ve never been a hype band I don’t think, we’re slow and steady, but the benefit of that, and the thing that I’m most thankful for is our amazing fans. Today, I could point you out five people on the front row that I saw in pubs when were a DIY band and they keep coming back. I know a bunch of them by name, and we’re lucky we have such an incredible fanbase, but the cool thing about that is… and this is a bit of a brag, but I’m quite confidently saying we are the hardest working band, at least in the UK, at our level. I know a bunch of my friends’ bands and DIY bands that literally don’t go home. They don’t have a fixed residence!

And how has the journey been since ‘Welcome To The Neighbourhood’?
We just wrapped up our second US tour on that cycle. We’ve done one UK tour; it’s been incredible, honestly. Props to the UK, the reaction to the new stuff was very immediate. When we did that first US tour, it was great, but I think we fostered such a culture with our first record, and Warped Tour, so the new stuff was fairly unfamiliar, but we just came back on this last tour, and the reactions were insane. It was more so for the new stuff than the old stuff, which as an artist, is what you want really, your latest stuff being received well. It was incredible, and we took a big risk and a big sonic leap on that album, and we were blessed with fans that trusted us and gave us the benefit of the doubt and have been on board. 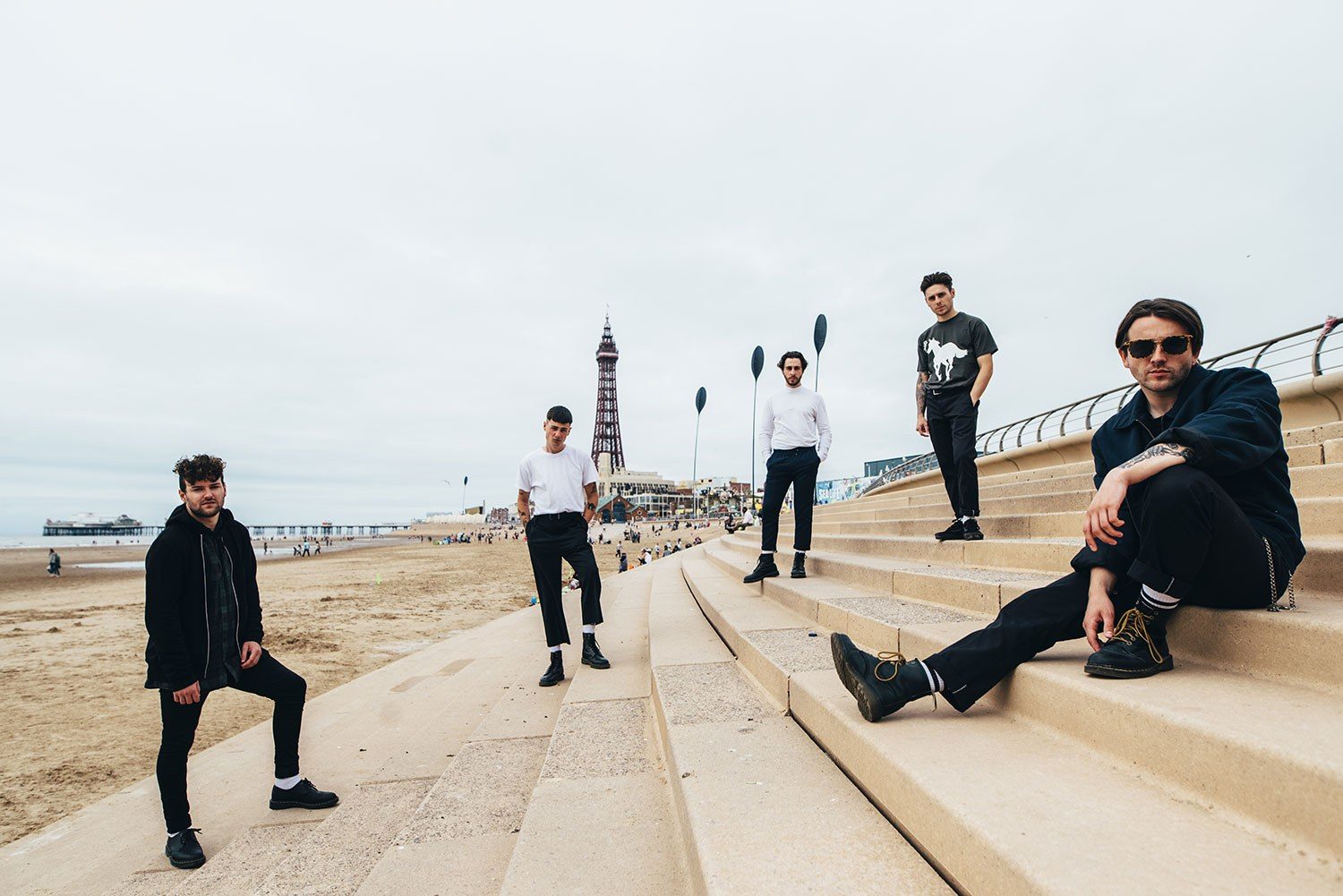 “We took a big risk and a big sonic leap, and we were blessed with fans that trusted us”
Henry Cox

The album’s loosely centred around your experience of Blackpool, how does that translate around the world?
That’s the crazy thing. I remember we did that Upset cover feature and we talked extensively about it because we wanted to use Blackpool, where we were from, as a bit of a metaphor. We did this record, we first got our experience touring around the world, and went to all these places for the first time, and came to all these new places and went to see so many different cultures. The thing we noticed was that the things we grew up with and the problems our hometown faced are unanimous around the world, especially America and places in Australia, and I guess a part of it is about Blackpool but mostly it serves as a metaphor for the issues of society at large because young people anywhere, at least in western culture that I’m familiar with, everybody experiences it.
Blackpool is the second poorest town in the whole country, and that’s where I spent my whole life, and I love it. If you’re from Blackpool, I’m sorry if I’ve spent the last year talking shit on the town in the press because I am so passionate about the town, I love it. It has such uniqueness and heart to it, but it is a very poor area and deprived area.
I wanted to write a record whereby I had stuff to say on a social-political-economic level, and cultural level. At the same time, I don’t want to ram my ideas down your throat if you’re from a very different culture. So, we wrote an angry record, with the idea being even if you’re not from a western country, where there’s X, Y and Z happening at the time – we have an amazing fanbase in Asia and India and places like that – you can connect with it on a personal level. I’m always careful not to say too clearly what each song is about, but it might be some song about the fucking Torys – not saying there is, but if there was – you might be mad at your stepdad, and you can find some catharsis and anger in that.
That was the aim of writing that record, and I’m pleased to say that I think it was understood. I try to go to the merch most nights and talk to fans, and so many people come up to me and say ‘oh I was having a hard time, was so frustrated and the record resonated with me’. It’s a humbling conversation to have for sure, and we’re lucky, we took a bit of a risk but it definitely landed.

Absolutely – it’s such a strong album that resonates.
I feel like to be a young person in Britain you can’t exclude politics in 2018-2019, and I’m assuming 2020 – it’s a big factor in our society, so it plays a part. 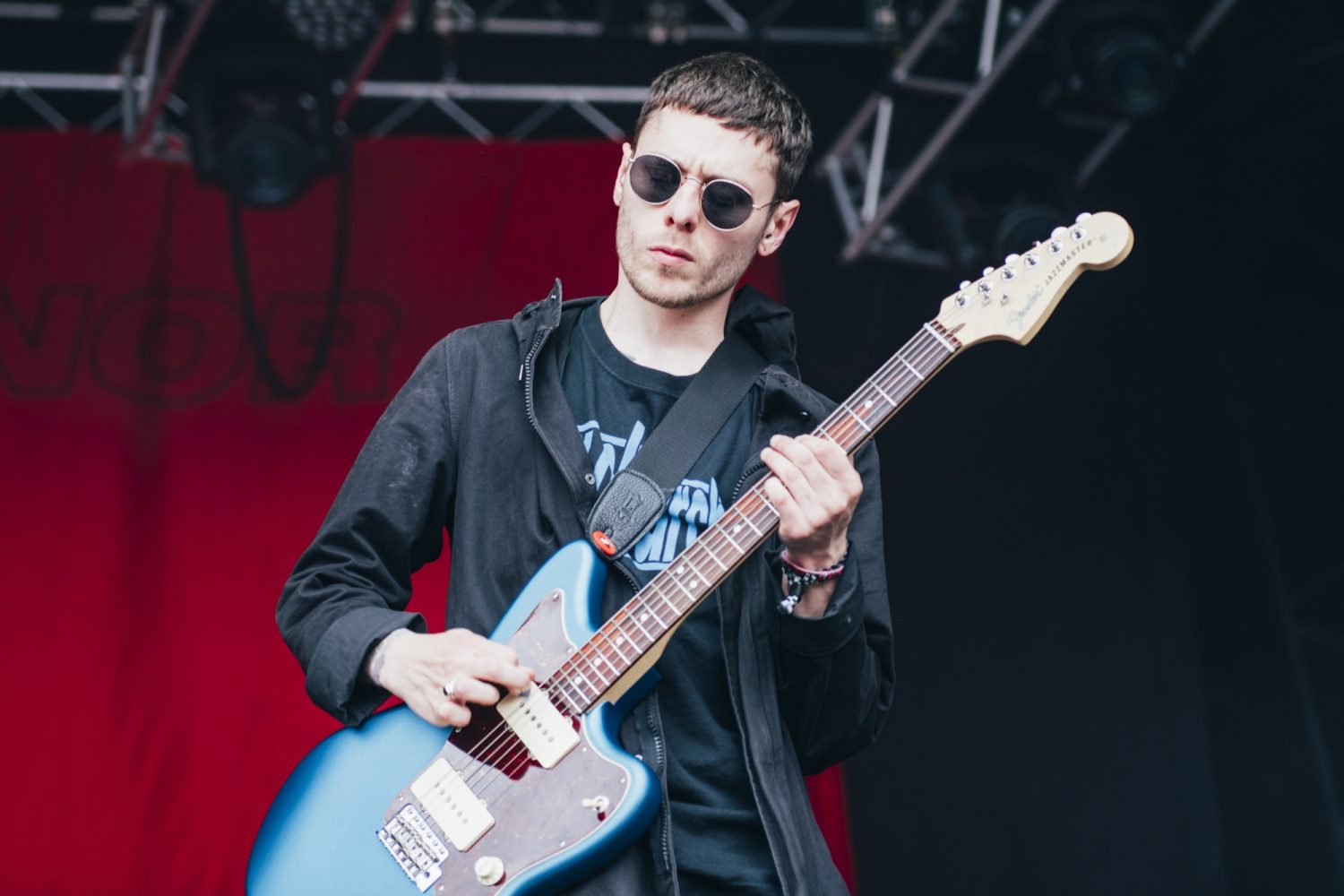 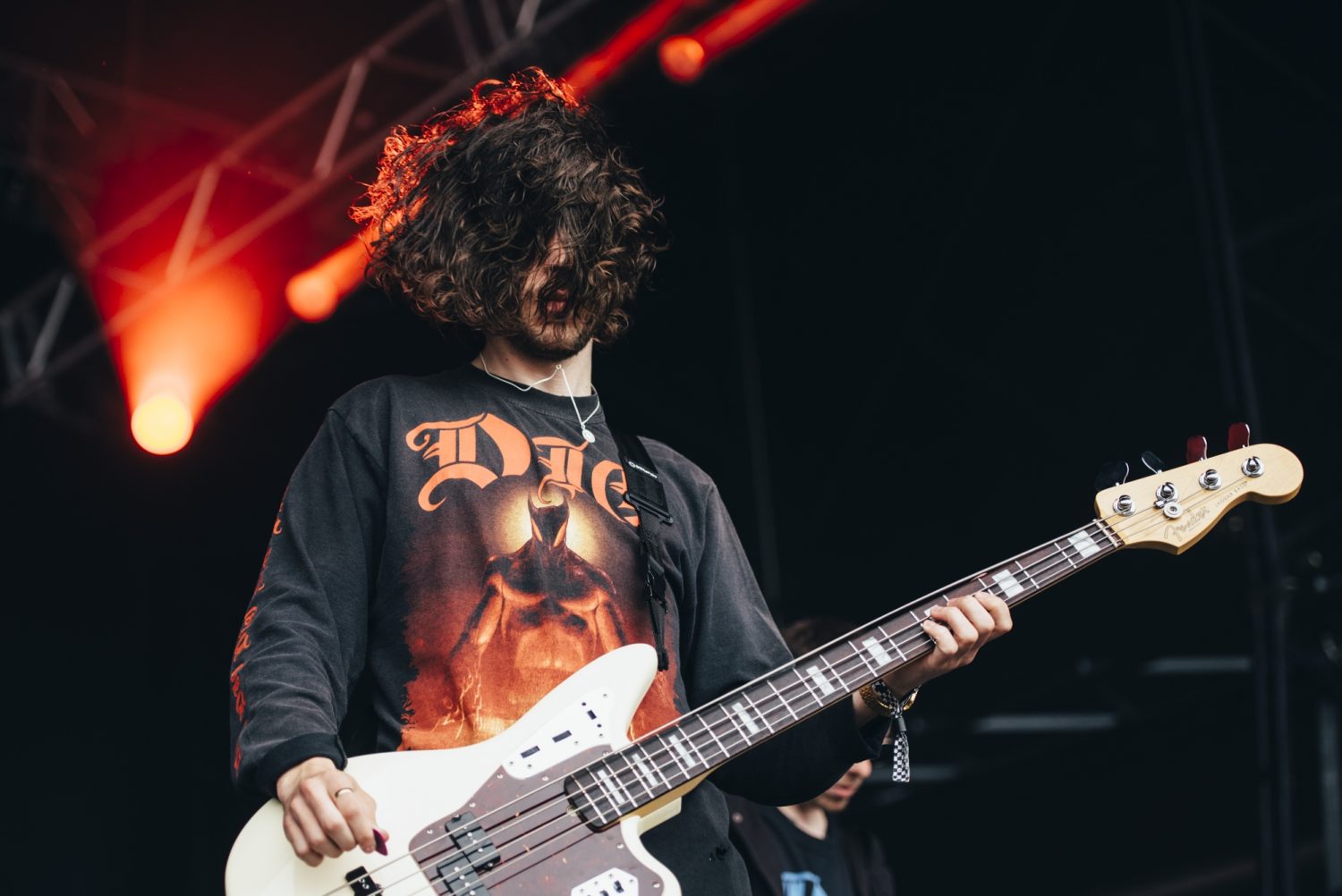 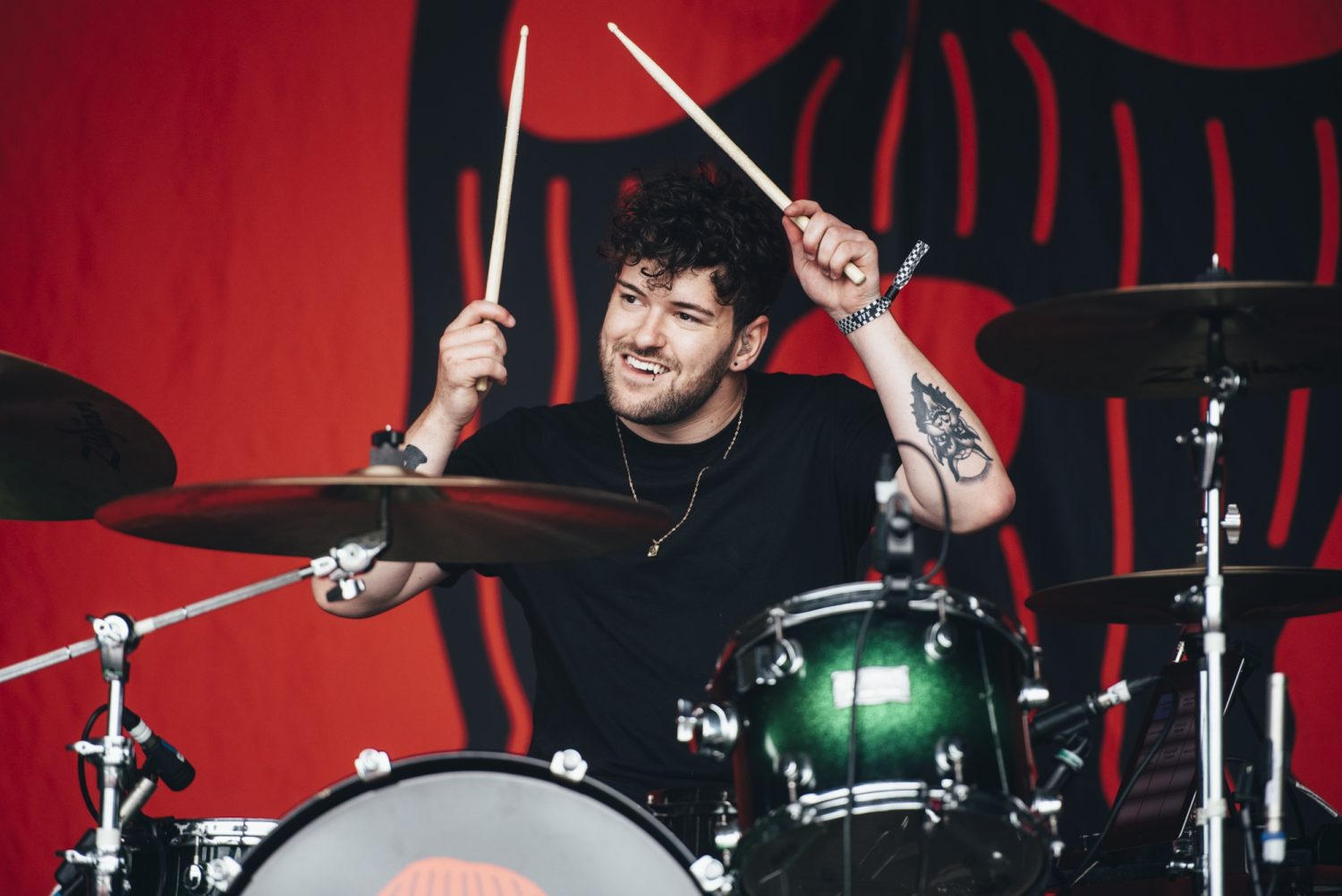 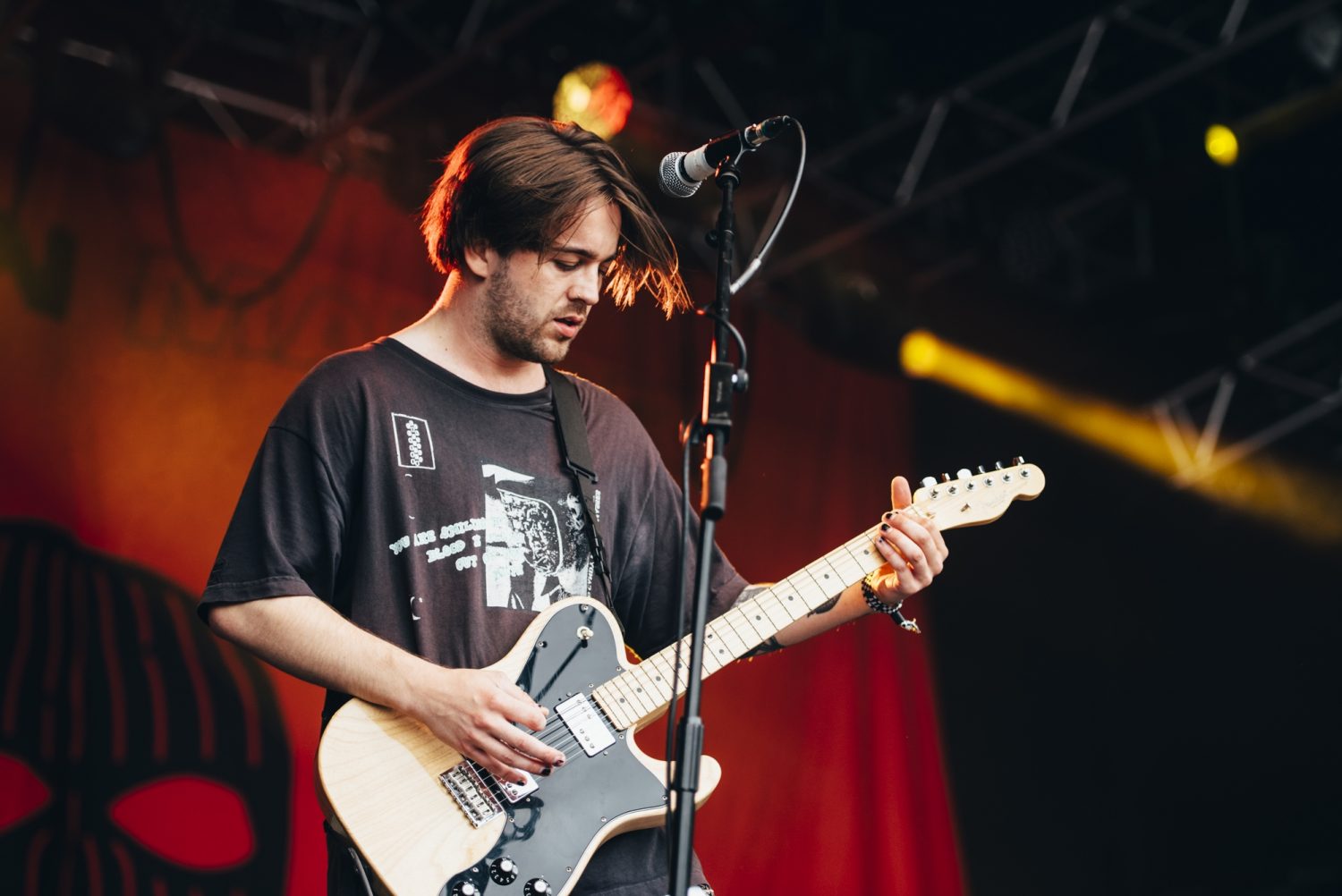 “There are songs that have been written for the next record, and even some that’ve been recorded”
Henry Cox

Since doing that, and touring those songs, has there been a catharsis about the situation for you?
100%, I feel some catharsis. Some kids have told me that’s how they feel, but that’s how I feel. I’m in my mid-twenties, and there’s stuff I see and hear and read every day that makes me so frustrated that I have the luxury of being able to scream my fucking head off every day, and it is cathartic for sure.
At the same time, it’s from what I’ve seen stimulated some conversations. It makes people aware of what’s going on, but also, we talked about, have you seen the same things overseas? Especially America. There are so many towns and cities you drive through – and even States – there’s not much going on. You hear about New York and LA; there’s that other 95%. So many of them feel so disenfranchised. I’ve seen them feel that catharsis through that. It’s very rewarding, but without trying to get dramatic, it can feel quite emotional. We did our London headline show at Electric Ballroom, and I felt that anger and that aggression from the crowd about those things. It’s a very emotional experience.

What’s the future for Boston Manor looking like?
We’ve been talking about that a lot recently. We’re always writing; there are songs that have been written for the next record – whenever that comes out – and even some songs that’ve been recorded. We’ve found ourselves in a strange position where the last record was so focused, and we still have a lot of things that we want to say. The way I feel that things are now is if ‘Welcome To The Neighbourhood’ was the fire, then this next album is the smoke and rubble.
There are a lot more things we’re talking about and expressing, and I don’t want to say it’s not as focused, but there’s more to it. It’s a bit of a mixed bag of emotions, and I’m trying to find it hard as an artist to anticipate those questions of how would you define this record. I’m finding it quite difficult to come up with that headline, you know?
It was very easy to put that in text and in a box, but if you really liked the last record, and even the first record, you’re gonna like the new album – whenever it comes out. I’m finding it hard myself because we’re all changing, and my emotions and views on certain things have changed. I’ve got a lot more things to say in different areas. I don’t want to be a band that’s known for one thing.

Taken from the July issue of Upset, out now – order your copy below.