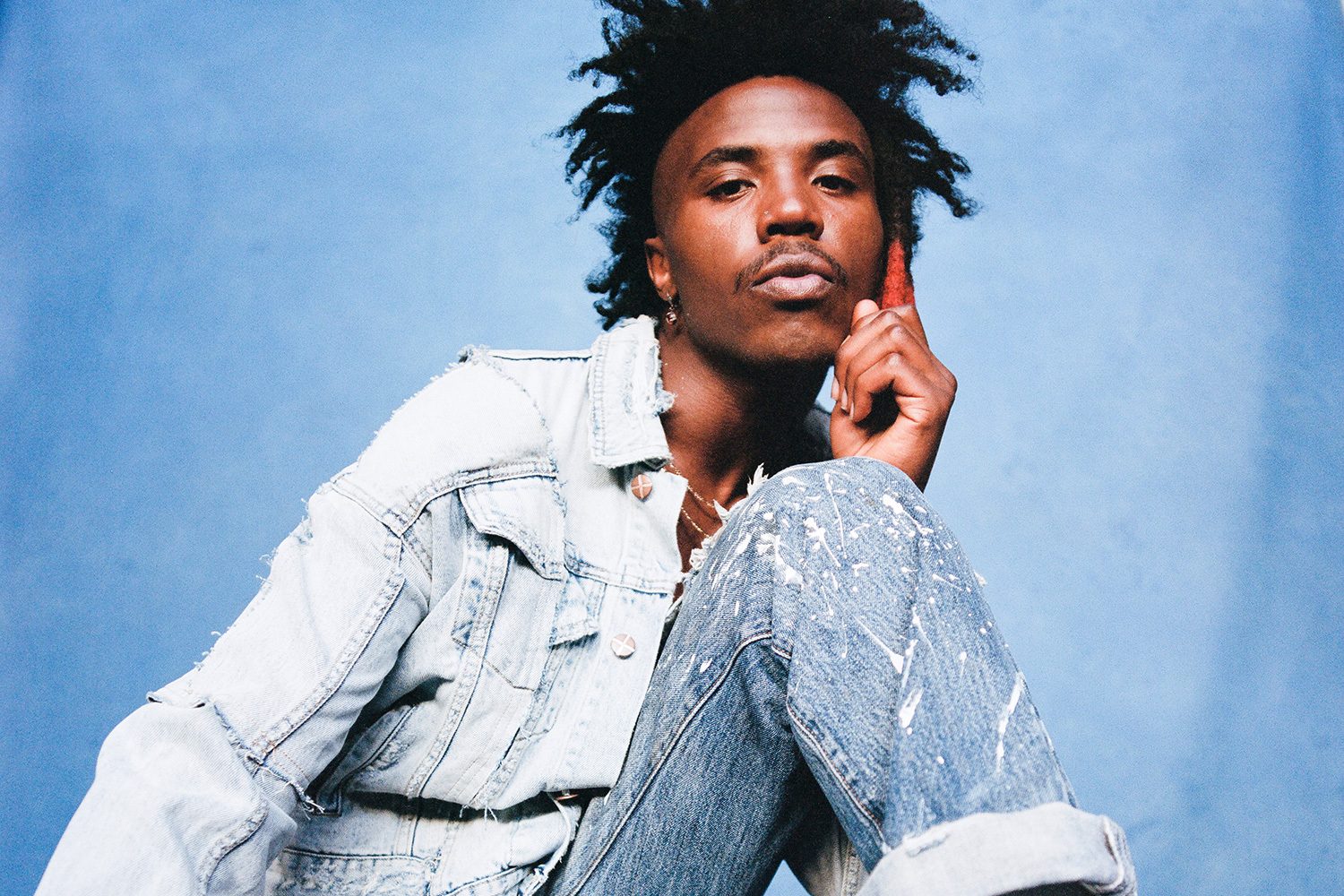 De’Wayne: “I don’t want to be an indie artist forever”

With a new album to round out the year, De’Wayne’s fighting fit and looking to the future.

If there’s one thing we’ve learned about De’Wayne is that he’s not one to rest on his laurels. Hot on the heels of ‘Stains’ – his 2021 Upset Album of The Year debut – he’s already armed with his next instalment.

Where ‘Stains’ was a collection of his fraught and angry self, boiling away for years (7 while trying to be an artist and 25 years of just living), its follow-up, ‘My Favourite Blue Jeans’, struts around on the surface. But beneath, De’Wayne opens up. Battling insecurity while toting his trademark confidence, his reflection on his time becoming an artist is summed up with an immediate, “The honest answer is pure hell, to be real with you.”

Currently whizzing around in a car, the De’Wayne of 2022 feels like a more charged-up version of the one we first met a couple of years ago. He’s now one album deep into the career he first began manifesting all those years ago, which means he’s old hat at this now. De’Wayne Jackson, who first upped sticks from Texas for LA with stars in his eyes, is now bonafide De’Wayne the artist. Yet, those trials that wound up on ‘Stains’ live there now. The future is all about the present, and, as the man himself says, his next goal is “to really cultivate something awesome and something that people could still feel inspired by.”

While the energy on ‘Stains’ was palpable, it was more of a release valve than a direct influence from the life around him. “I was kind of angry and just yelling,” he admits. “But with this new album, I got to talk about a specific time in my life and put it on record like all of my favourites do, and I think it really just came across both in my writing and the growth of my confidence and everything like that.”

In good company on his return, a handful of guest spots from Good Charlotte (‘Take This Crown’) to I Don’t Know How But They Found Me (‘Simple’), and Grandson (‘Good Mood’) find their stylings lending a hand to De’Wayne’s punchy new groove. It’s bravura of the highest order, naming touchstones like Green Day, Bowie, and The Cars (“they made the most beautiful pop rock music, and they sang the biggest hooks”), De’Wayne the artist isn’t content to just be making songs, he wants to be taking them out into the world and make sure they exist. “I wanna be humping a stage and singing the biggest hooks, you know what I’m saying?” he says deadpan. “I’m saying I have no shame about that. So I think once I went to that side of my brain and I was, ‘Okay cool, this is what I want to do’, that’s really helped me, and it really helped me with the new album. I think it’s helped me just in my everyday life – knowing where I want to take it and just having a sense of where I want to go in my career.”

Kick-to-the-face opener ‘Die Out Here’, featuring POORSTACY, concerns his pondering of his musical heroes who all passed tragically young. As an artist, De’Wayne is someone who reflects himself in his inspirations, and in this instance, “It’s about me, fantasising and idolising. All of my favourite artists, they all died at a young age, or they overdosed, and then for me, it’s just like, do you really want to do that, bro?”

De’Wayne’s zest for life and love for his family are what kept him grounded. Asking himself, “Do you really want to leave your eight brothers and sisters behind? Do you really want to leave your parents behind? For wanting to have fun and wanting to be stupid? I was like, no, I don’t… I don’t want to die at 30 in LA on some hill, you know what I’m saying? And that was my idea; last year, I really wanted to kind of go… not in a dark way. But I was like, ‘Well, it’d be cool.’ Like it was really a thought that came to my mind, and that made me realise that I don’t want to do that. I want to be here for the long haul.”

Something he’s been reckoning with recently is his standing as an artist. Discussing his life post-‘Stains’, De’Wayne’s energy bubbles, feeling like a solar flare ready to burst. “I know that I’m ill, and I know all these things, but I don’t want to be an indie artist forever,” he admits. “You know, I don’t want to do that shit.” The frustration stems from his ambition, the scope of which is only limited by the physical world around him. “You gotta get up to the next level and the next steps, and I’m out of my deal with Hopeless next month, so I’m really excited about things. I could just keep on going!”

Forward momentum is all he knows how to do. De’Wayne’s journey to becoming an artist, while tumultuous, has, however, meant that he’s been prepping for all scenarios. From playing festivals to gigs around the world, dropping his albums and sailing off into the sunset ready to tote his songs to any who’ll listen has all been a part of the plan. Training with the manifesting ferocity of a Buddhist monk, he mentions that this time wasn’t “really uncharted because I’ve already done these things in my mind a million times. I’ve already practised these things in my mind, and that’s just as real to me as when it’s happening. So once it started happening, I didn’t freak out, and I still do call my mom and my friends and tell them things,” he continues. “And hear the songs on the radio, I cry a bit, but I practised all these things. To my mind, it feels right, even though it is a bit much for me. But yeah, I’m not content, bro.”

De’Wayne is refocusing himself. Gearing up to maintain his ambition and honing on the drive to break out of being an indie-level artist, these realisations play into ‘My Favourite Blue Jeans” bravado (“Blue jeans is just like my superhero. It’s my superhero fit,” he mentions). It’s seconds out, round two for De’Wayne, and he’s eyeing up the prize.

Mentioning the numbers his current three singles are doing – a few times during our chat – De’Wayne seems hellbent on not just being an artist, but being recognised. The frustration is palpable as he spills over himself, trying to get the words out. But, the guy from Texas still shimmers below as he admits, “Just making the second album for me is big bro, because, you know, I come from having to work for everything. So I’m glad that I’ve made it to my second one. It feels very special.”

“I have realised this year that I’m very much a tiny artist, but my energy is not that, and my songs are not that. I just want to keep continuing to do that, and I want to be very big, and I don’t feel weird about saying that.” Pausing for a moment of brief reflection, he continues. “Like, I think you know that – I’m sure you’ve heard me say that a million times, and that’s where I’m at with it. I’m not sad. I’m a tiny little baby that has a lot of potential, so I just want to keep going, and I just want to be able to do whatever the hell I want to do in my life. And I gotta do a lot of work, but I really just want to play big shows and make my family proud.”

Taken from the November issue of Upset. De’Wayne’s album ‘My Favourite Blue Jeans’ is out 28th October.