Frank Iero: “It’s very much my MO to do the thing that scares the shit out of me”

Heaven Is A Place, This Is A Place’ is a title inspired by a cocktail in a tiki bar in Chicago. There is no hidden, deeper, meaning beyond that; to Frank Iero, it was just a clever name.

And, for this EP, everything else is just as simple. It’s three tracks taken from particularly fertile writing sessions with The Future Violents ahead of making their album ‘Barriers’ which was released in 2019, and a cover of R.E.M’s ‘Losing My Religion’ too.

For all the usual deep dives into symbolism, imagery and double meanings that swirl around the artistic motivations behind making music – more so with Frank and especially in My Chemical Romance – this EP is refreshing in how little lies beneath the surface.

If you scrape hard enough, you can find that the photograph on the cover features Frank’s own father-in-law and the photo was taken by his grandmother-in-law who subsequently features on the album cover of Frank’s other, other side project Death Spells. That, and the first line from the EP’s closer ‘Record Ender’ is a callback to one of his first bands, Hybrid, and screenprinting t-shirts in his mum’s basement in the late 90s.

There are little breadcrumbs, but, as he states, “I don’t think everything needs to be this high concept.”

Instead, ‘Heaven Is A Place, This Is A Place’, in Frank’s words, “bookends” his time with The Future Violents and is an invitation to gain a better understanding of the world the band created in ‘Barriers’. But, really, he would rather let the music to do the talking.

“I’ve always been of the mind where, I understand that people like to label things or describe things so that it gives people an idea before they listen to something, but I always just thought well if you’re gonna take two minutes or three minutes to describe something, just play the fucking song,” he admits.

So, let’s cut to the chase then. The EP is an extension of ‘Barriers’; sonically expansive in almost every direction and fiercely defiant of becoming predictable or easy to label.

Opener’ Violence’ is the sound of sadomasochism with its chorus line of “Your violence feels like kisses to me / your silence makes it harder to breathe / your distance feels like I’m not enough / I need your touch”. Frank paints the tune as “sleazy and sexy and wrong” and explains it as “trying to figure out what is violence, what is love, what is affection, what is abhorrent? And sometimes those lines get blurred.”

From there ‘Sewer Wolf’ flexes The Future Violents’ most chaotic, visceral, energy before the EP splits its intention to the careful, precise, mandolin-led cover of the R.E.M classic.

“However, I think in that one session I tried to do all the things that you should not do!” he laughs. The “session” he refers to was at BBC Maida Vale too; so no big deal either.

“It was like we’re gonna cover ‘Losing My Religion’ by R.E.M, there’s a song that no one wants to hear anyone else’s version of because the original is just perfect and everyone knows it, and then also we’re gonna be at BBC, and we’re gonna cover The Beatles! How could you get just more cocky and ridiculous?!? It’s very much my MO to do the thing that scares the shit out of me,” he adds.

But, the magic of that cover is brought by Kayleigh Goldsworthy whose mandolin takes charge before her backing vocals haunt the later choruses in the track. The plans for recording the ambitious cover date back to 2017 when Frank first resumed touring following the near-fatal accident he and his bandmates in The Patience suffered in Sydney the year previous. The band, lucky to be alive, toured with Dave Hause’s group The Mermaid with whom Kayleigh played guitar, and from there she and Frank hit it off with their shared love for R.E.M and the song they’d first cover in a stairwell in San Francisco on the last night of that tour.

Now, with Kayleigh Goldsworthy as a fully-fledged member of The Future Violents, releasing the cover was about representing the ragtag nature of this band and the opportunities that are made for Frank through his many reincarnations in different bands.

‘Losing My Religion’ went from “a no, and I would never even go near it” to an iPhone notes recording to being released thanks to Frank’s determination to eventually work with almost all the friends he’s made over years as a touring musician.

“That’s the great thing about touring and meeting fellow artists and musicians and people that are on the same wavelength as you,” he starts with a detectable note of yearning in his voice; lamenting a year where he has been little more than a homeschooler to his kids, dog Dad and turtle rescuer.

“It often happens with friendships, but I think it’s a whole different level when artists meet other real artists, and you kinda pass by each other. Because the touring community really is not that big, we kinda all know of each other and what’s going on in everyone else’s business so when you meet the real ones you hold them close, and that’s how really I think this whole band came about.’ 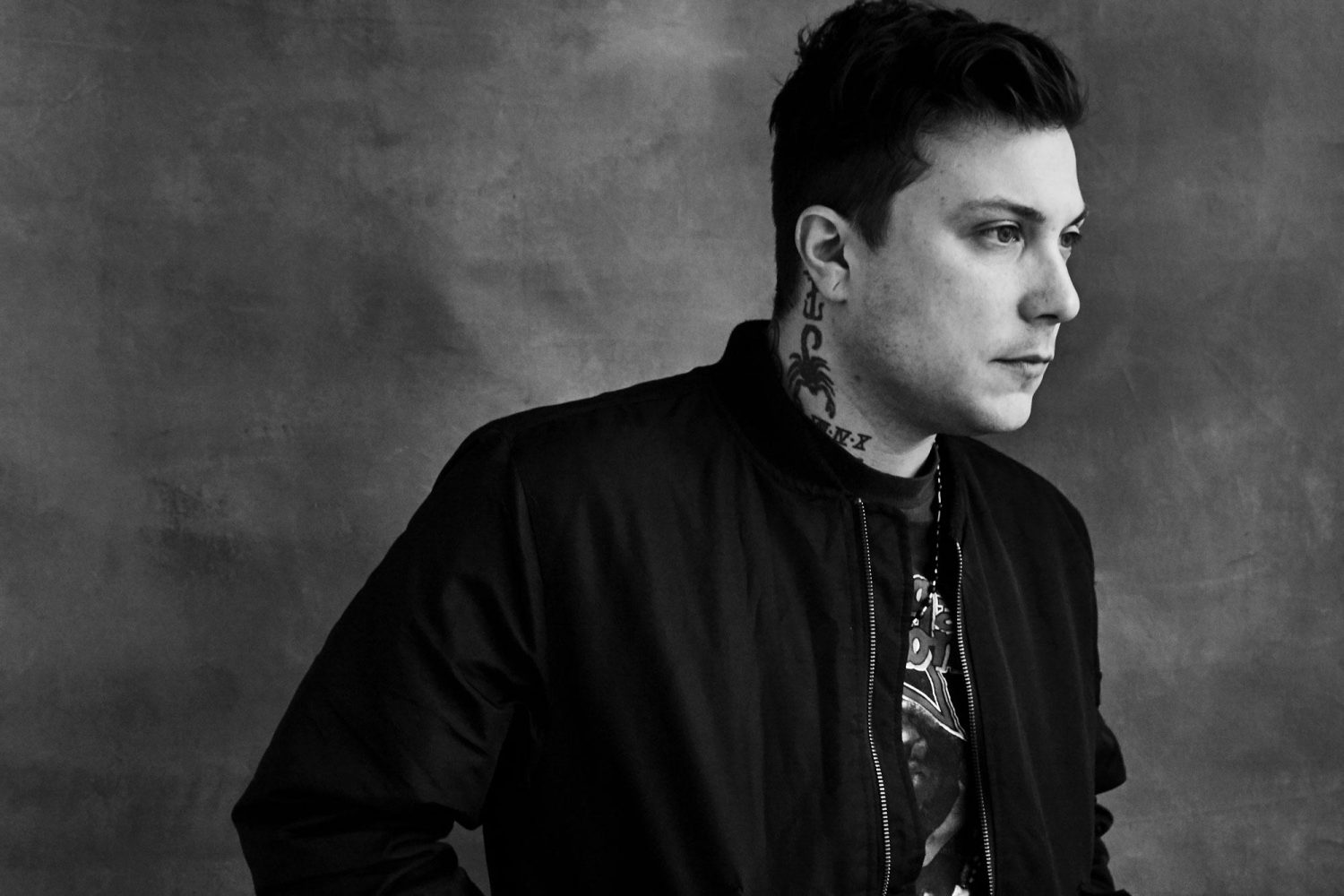 “I have a weird superstition about numbers; I don’t like to leave odd numbers of things”
Frank Iero

‘With knowing Tucker [Rule of Thursday] for so many years and Matt [Armstrong of Murder By Death] of course, I met both those guys back in 2001 and back then the seed was planted that “oh I would love to write music with these guys, how cool would that be.” And so, just do the thing that you’ve always wanted to do, don’t wonder, do it and fail at it because at least if you fail at it, you’ll know. I think the idea of never knowing and always wondering or wishing is the killer.”

With the R.E.M cover justified with not a new lease of life but rather a Frank Iero special dose of melancholy weighted on top of it, the EP reaches otherworldly heights with the epic, soaring, finale of reductively titled ‘Record Ender’.

The track is the “alternate ending” to ‘Barriers’; the song emotionally married to the actual record ender ‘24 K Lush’. “I had to kind of split them, it was one of those where “this record ain’t big enough for the two of ‘em,” Frank comments.

It’s essential to know that the tracks for ‘Heaven Is A Place, This Is A Place’ are not the B-Sides, the trimmed fat or even the leftovers to wipe the slate clean again for Frank Iero. Instead, they’re the remnants of what could have been a double album from The Future Violents but time was against them as they headed to Electrical Audio Studio in Chicago when making ‘Barriers’.

“I genuinely think if we had the luxury of more time, there would have been at least another 5-10 songs,” Frank reveals. “We didn’t stop writing because we ran out of inspiration, we just ran out of time.”

With producer Steve Albini, the band recorded 17 songs in 13 days at “breakneck speed” Frank remembers. From there, his artistic vision and borderline obsessive-compulsive tendencies to make a 12 track album worked to whittle down what was recorded.

“I kinda had to allow myself the extra two [tracks], I felt like the record deserved it,” he confesses, and ‘Barriers’ became the 14 track album we’ve come to know.

And that means, once ‘Heaven Is A Place, This Is A Place’ is released in mid-January then every song The Future Violents have ever made is out in the public domain. So, what next? “I don’t know. I really don’t,” is his answer.

“I know I’m hungry to do more, to write more and do something else. There are a couple of little projects I’m working on at the moment, who knows what or if they’ll turn into anything?” he continues.

Having already transformed from andthe cellabration to The Patience and, now, The Future Violents, it wouldn’t be too much of a stretch to imagine another iteration of the Frank Iero solo series is beginning to chrysalis.

Teasing, seemingly tethered to the liberation that has been The Future Violents where there were no rules but to do the unexpected, he adds, “I think the idea of a trilogy is really nice. I feel like it’s kind of classy and classic, but for me, I have a weird superstition about numbers and things of that nature, and I don’t like to leave odd numbers of things.”

So it would have to be another album and EP then? Or even another two albums? “Weirder things have happened, but we’ll see how it goes. I definitely have some stuff,” he replies, less convincingly.

In truth, the release of something new for Frank Iero and The Future Violents may also signal the end too but in no way does that seem to phase the singer.

“It’s nice to have that clean slate you can go anywhere you want from here, even if maybe what you want to do is just shut up. I think the future is yet to be written, so we’ll see.”

Taken from the February 2021 edition of Upset. Order a copy below. Frank Iero’s EP ‘Heaven Is A Place, This Is A Place’ is out now.