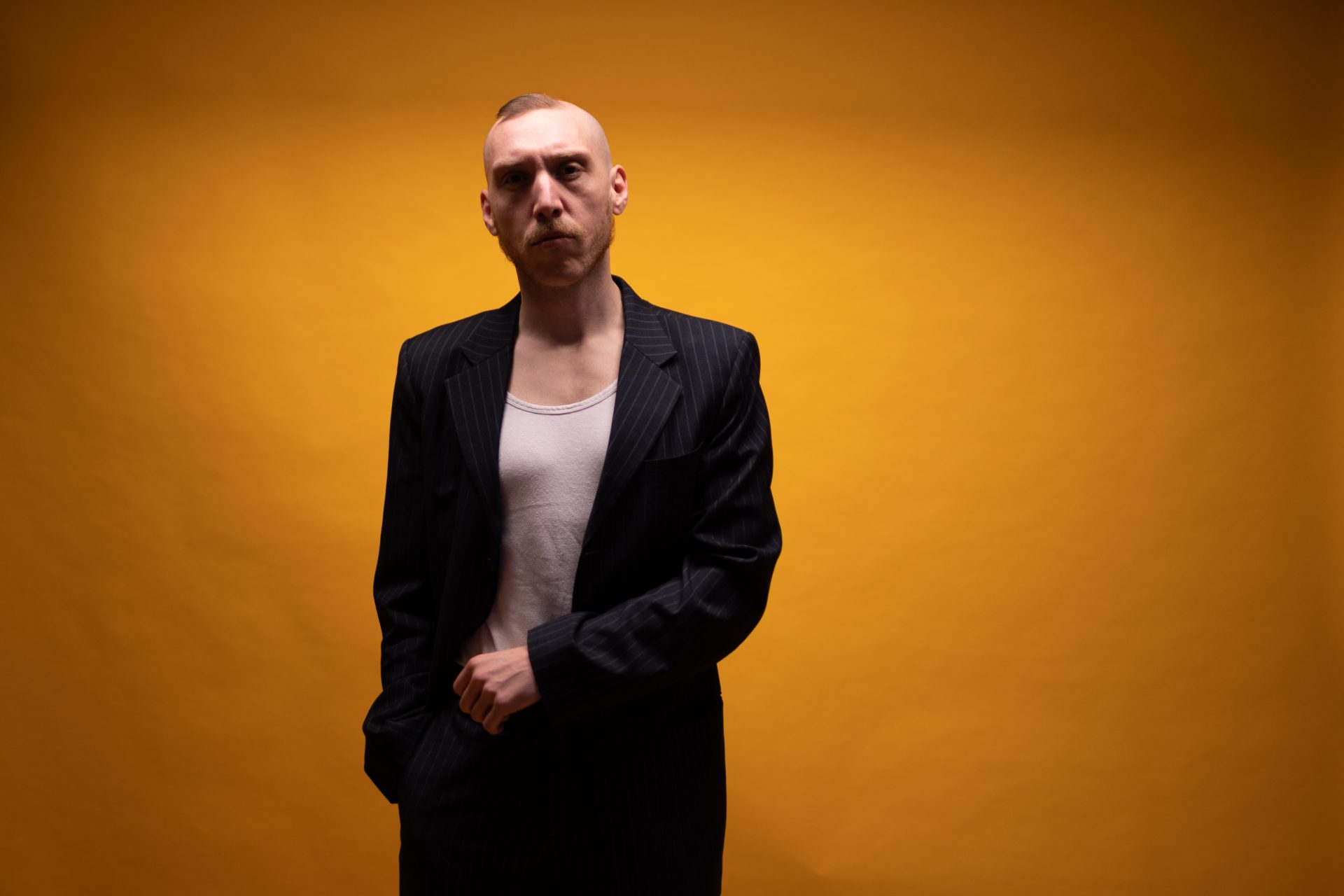 Jamie Lenman: Love is all you need

Jamie Lenman explores love and atheism on his fifth and freshest album yet.

“You really think there’s a heaven and hell? Well, maybe there’s a planet Krypton as well,” spits Jamie Lenman sarcastically. It’s the opening line on the first track of his new record; a bold lyrical statement to match a bold album title, but then again, Jamie has never been a shrinking violet. ‘The Atheist’ sees the musical chameleon declaring his position on the existence of God, and it’s something he’s been wrestling with for a long time.

“I like the way it describes me, Jamie Lenman: The Atheist,” he explains. “I had a few titles I was playing with, but I thought ‘The Atheist’ was the boldest and would tell people something about me before they pick it up.”

It’s a heavy theological subject to wrestle with, but this isn’t Jamie’s God-bashing concept album. While not all of the songs deal directly with religion, it was a deliberate choice to bookend the album with two tracks that directly reference God, or rather, the lack of God: aforementioned opener ‘This Is All There Is’ and closer ‘War Of Doubt.’

“It’s like saying at the beginning, ‘Hey, we’ve accepted there is no God, now let’s talk about this other big stuff with that in mind. No one is going to come and help us; there’s no one else to rely on but ourselves, so here are the socio-economic concerns, and here are the political concerns. It provides a nice umbrella theme for everything else to sit under, even if it’s not being directly tackled.”

Reminiscing on his upbringing, Jamie recalls how he wasn’t raised in a particularly religious household but that God’s existence was established simply as a natural fact. “It’s just presented as a fact of life: there’s God, heaven and Jesus, and you don’t question it until you grow a brain and think, ‘Hold on a minute’. I went through a period of really trying to become a practising Christian, and I tried to go to Church on the regular, but it was awful.”

He credits watching a little-known cult Australian film called ‘Bad Boy Bubby’ by Rolf de Heer as a lightbulb moment when it came to figuring out where God fit into his life, so much so that ‘This Is All There Is’ and ‘War of Doubt’ open with soundbites from the film.

“It’s an enormous film that’s pitch black in places – a very dark ‘Forrest Gump’ is a lazy way to describe it – but it’s the story of this character who at the end arrives at his own atheism, and it’s portrayed very much as a positive, and that’s what I wanted to do. Everything made so much sense when I saw that film, and it enabled me to tackle life so much easier. I was so much happier.”

A record about atheism could have had the potential to be angry or bitter, particularly on the heels of 2020’s ferocious ‘King of Clubs’ but Jamie insists the opposite is true, that ‘The Atheist’ is his lightest, most accessible record yet – a tonic for the darkness of ‘King of Clubs’. Sonically, it’s softer and more melodic, leaning towards indie-pop and even flirting with stadium rock. If 2019’s ‘Shuffle’ was Jamie scratching a creative itch, and ‘King of Clubs’ was a release of pressure, then ‘The Atheist’ is a long-held ambition to make a poppier record that there’s finally been space to realise.

“I’ve been trying to make this record for a long time; even before I made ‘Devolver’ in 2017, I had a discussion with my producer Space about what kind of record we should make. I had this idea of no distortion, no shouting, a lot of acoustic guitars and gin-soaked ballads with a poppy vibe, but he said no, we should make a post-hardcore record, so we made ‘Devolver.’ So, I’ve been trying to make ‘The Atheist’ since then; it just got shunted out of the way by two records in between.”

Embracing the lighter side of things on this record certainly suits Jamie: despite the subject matter, ‘This Is All There Is’ is defiant and hooky with a big attitude-filled sing-along chorus, and ‘Song On My Tongue’ brings to mind Jimmy Eat World with its twinkly emo guitar breakdown. Elsewhere, softer tracks such as ‘Hospital Tree’ strip away any pomp for heartfelt vulnerability.

Queen and Weezer are two bands that have been name-dropped in press releases, and nowhere are the stadium-bothering sensibilities more apparent than on the tracks where Jamie explores another of life’s big topics: love. Atheism and love may seem like two polar opposite subjects, but in the absence of religion, Jamie placed his faith in love.

“Okay, we don’t have God, but what do we have instead – and the answer is right in the middle of this record, on tracks five and six – we have this amazing woman.” Jamie is, of course, referring to his wife, who he very clearly worships. Track five, ‘Lena Don’t Leave Me’, is Jamie’s lighters-in-the-air, fist-pumping pop banger where he celebrates his love for his wife, complete with 80s-esque guitar solo. It’s utterly brilliant.

“Those two songs back-to-back are about how I feel about my wife. ‘Lena Don’t Leave Me’ is about how she’s the other half of me, which is a cliché, but it’s exactly how I feel. Love is as present as the Godlessness on this record. I was born a romantic; my greatest ambition beyond being an astronaut or fireman or a rock star was to fall in love with my true love, a real Disney sense of the word. Once I’d found this person, I kind of didn’t need anything else, so you could argue that she’s what I have instead of God; her and music.”

In terms of both sonics and aesthetics, ‘The Atheist’ feels like the beginning of a new chapter for Jamie. His three previous albums ‘Devolver’, ‘Shuffle’ and ‘King of Clubs’ almost seem like an accidental trilogy of sorts: all were recorded with producer Space and are much sharper-edged than ‘The Atheist.’ The visuals were hard and shiny, using block colours of red, white and black. This new record is softer in all respects and saw Jamie working with a different producer for the first time in years. Recalling his “punk kid” roots, Jamie laughs joyfully when he talks about this new direction.

“I almost wrote some of the songs as an experiment, particularly ‘Lena’ and ‘Talk Hard’, as if I was trying to write the most balls-out stadium pop songs, like Queen and Toto combined. I’d never considered recording them, but management loved them. I mean, there’s a fucking key change in ‘Talk Hard’, but it just feels good! I’ve made a career out of what I would call post-hardcore songs that are long and windy with pretentious titles – certainly with my band Reuben – so to write a classic-feeling pop song feels incredibly subversive. Even though it might sound a bit staid and middle-aged to someone else, this is really daring stuff for me!”

With a musical career that is going stronger than ever over twenty years in, Jamie Lenman is still one of the most innovative artists in the UK alt-rock scene. With a seemingly endless creative drive to keep exploring and pushing boundaries, it’s astonishing that he’s about to release perhaps his freshest-sounding record.

“I just have something in my brain, I’m almost envious of people who can make the same thing again and again, but I get bored so easy. One of the first singles we put out with Reuben, ‘Scared of the Police’, featured the line, “I’m scared of becoming a statue, a monolith, and not changing, ever.” Staying the same has always terrified me, so I hold true to that. Twenty years since ‘Scared of the Police,’ I’m still following that line.