Back in 2016, Knocked Loose came through like a runaway freight train with their debut album ‘Laugh Tracks’. Along with it occurred a thunderous earthquake of ambition and promise, the likes that metal/hardcore hadn’t heard for years.

With such defying power, everything seemed within the white-knuckle grasp of Knocked Loose, but this all begged the question – where would they go next? Well, firstly, it turns out, wherever the fuck they wanted. But secondly, deeper into the subconscious of singer Bryan Garris.

Enter, ‘A Different Shade of Blue’.

Speaking with Bryan over the phone, he’s very reserved. A quiet muller, becoming the antithesis to his Knocked Loose persona who puts a savage voice to the ferocious sounds the band create.

“I’m very, very excited for people to hear what we’ve been working on,” he begins with a drawl. “If people liked ‘Laugh Tracks’ they definitely should like this, you know what I mean?”

Being a band with such promise on their shoulders was never a part of the plan for Knocked Loose. But Bryan, along with guitarists Cole Crutchfield and Isaac Hale, bassist Kevin Otten and drummer Kevin Kaine, aren’t ones to shy away from a challenge.

The follow-up, ‘A Different Shade of Blue’ explores precisely what that titular sentiment states. It’s a walk through the last couple of years of Bryan’s experiences of loss.

This approach was an inevitable outcome because, for Bryan, writing is “very therapeutic.” He uses this platform to explore the inner-workings of his mind. Mostly waiting to see what bubbles out of his subconscious, before putting pen to paper and seeing just really how he’s feeling.

“I try to get a lot of things off my chest that I’m not necessarily comfortable talking about to just anybody. Everything is very self-reflective and personal to me. I don’t write about stories or politics or things like that; it’s all very much for my own, personal feelings.”

Bryan doesn’t particularly delve into the ins and outs of these elements, but he does openly admit ‘A Different Shade’ deals with “personal loss, whether it be friendships or people passing away. Anything I’ve been through since ‘Laugh Tracks’ came out.”

Does this mean that when this self-reflection occurs, he uses it as an opportunity to better himself going forward?

“I definitely feel that I grow from it. I’m very grateful for the opportunity that the band has given me to get these things off my chest because otherwise I wouldn’t have said them,” he mulls.

“Sometimes things come out that I didn’t know I wanted to talk about. It’s weird having them [be so] intimate and out there forever. I think the best thing an artist can do is be honest and not worry about how people are going to accept it or react from it – and be completely honest with yourself. Sometimes that’s scary, but that’s what I always try to do.”

Exposing himself for all the world to see and understand before Bryan’s even had a chance to do that himself, is courageous. It puts him in an even more vulnerable position – one that he wasn’t quite aware of until it started happening.

“It was really surprising when all of these people started to know things about me, and I didn’t think about that beforehand,” he says. “I didn’t think, before writing the lyrics, that it was going to let a lot of people in. That was definitely weird for me to get used to at first. Just people knowing a lot about me that they didn’t before and asking me a lot of questions that I don’t know if I was prepared to answer.”

Indeed it’s a side effect with a particular level of controlling power. But Bryan knew he “couldn’t let it change [his] approach to writing” because it’s always been about remaining honest. The only thing Bryan knows how to do.

But before any words were committed for ‘A Different Shade…’, there was a pressure looming like a dark beast in a closet. Bryan mentions that he wasn’t “getting usable lyrics until we went into the studio to record.”

While on Bryan’s side things were slow to start, it was a similar situation for the rest of Knocked Loose, but always with the same menacing promise, they knew what they had to do.

“At first it was definitely nerve-wracking, but we had to take a step back and write for us. We needed to make a record we wanted to make and had to get out of our head about it,” he says.

“We were getting to the point of overthinking. We just had to ignore it and write what we liked writing before we worried about what people would think. We just wrote to write, and we had to go back to that.” 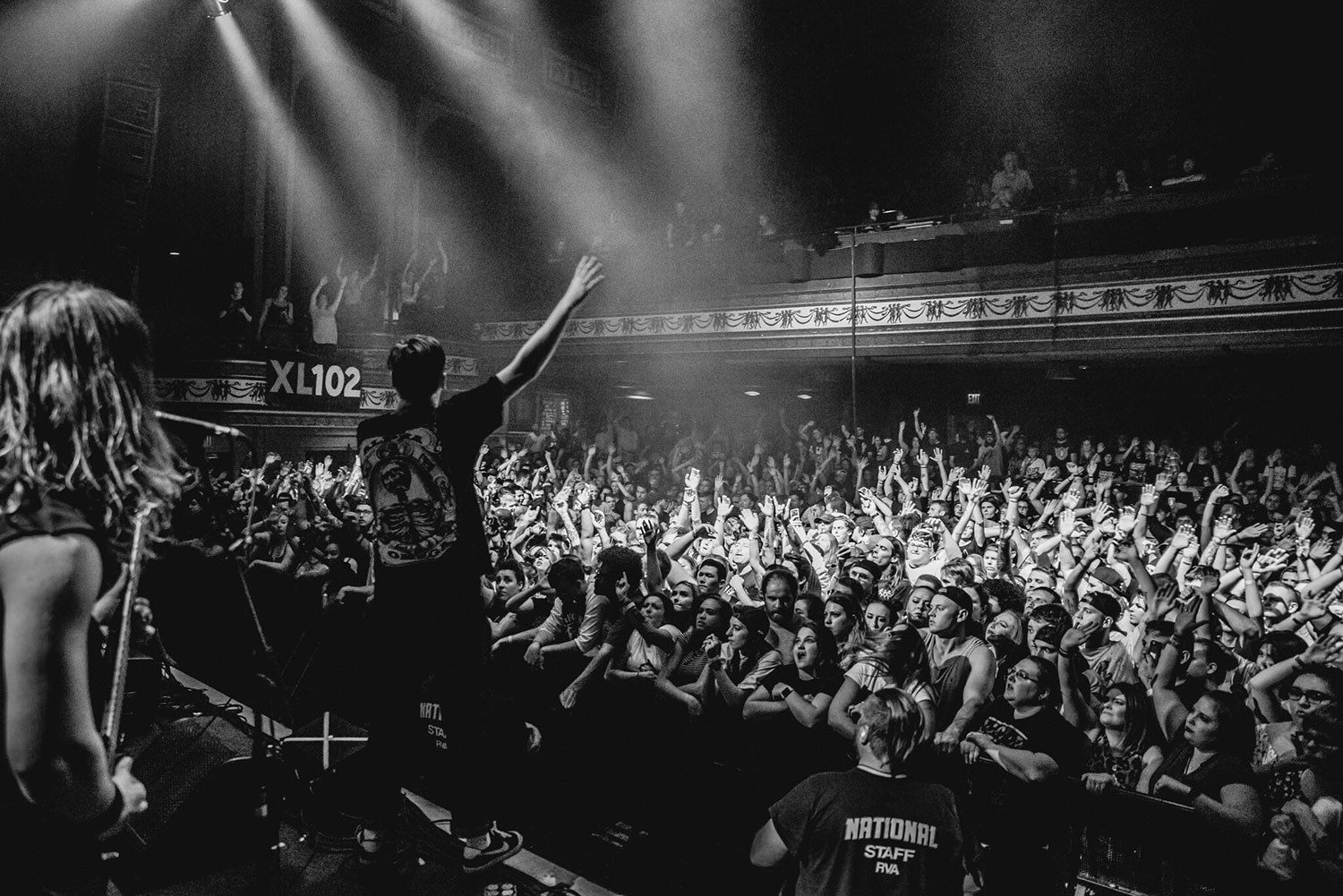 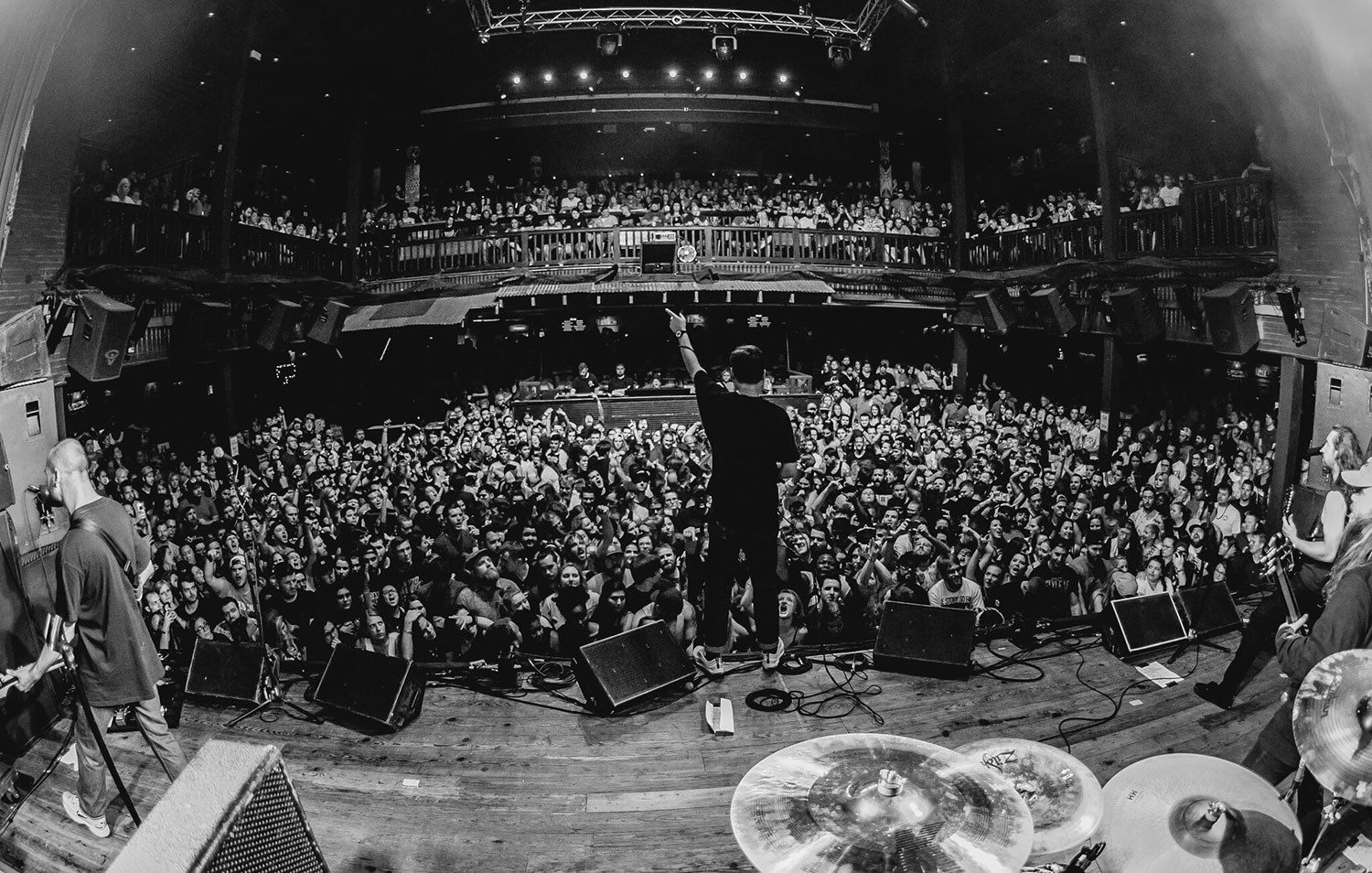 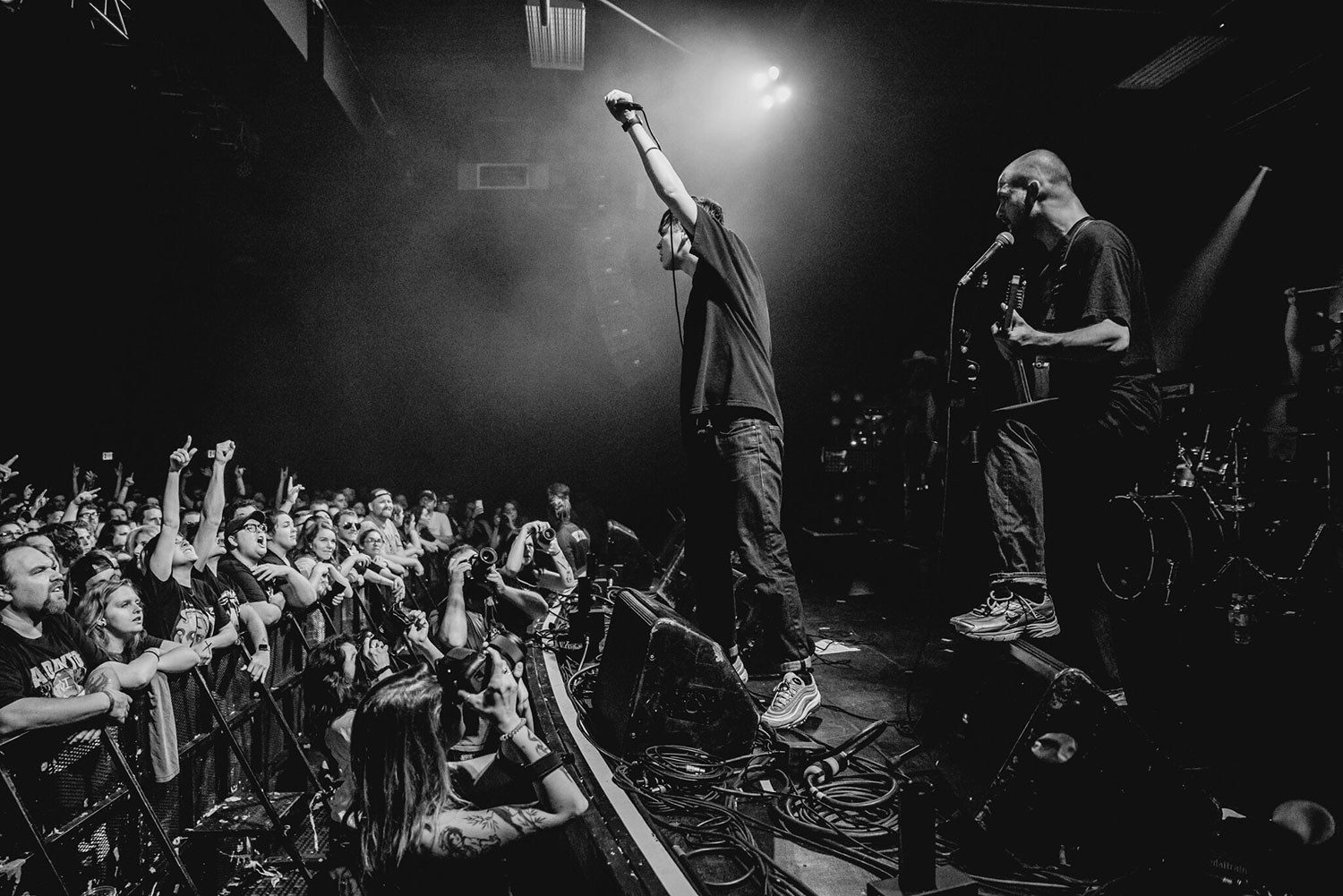 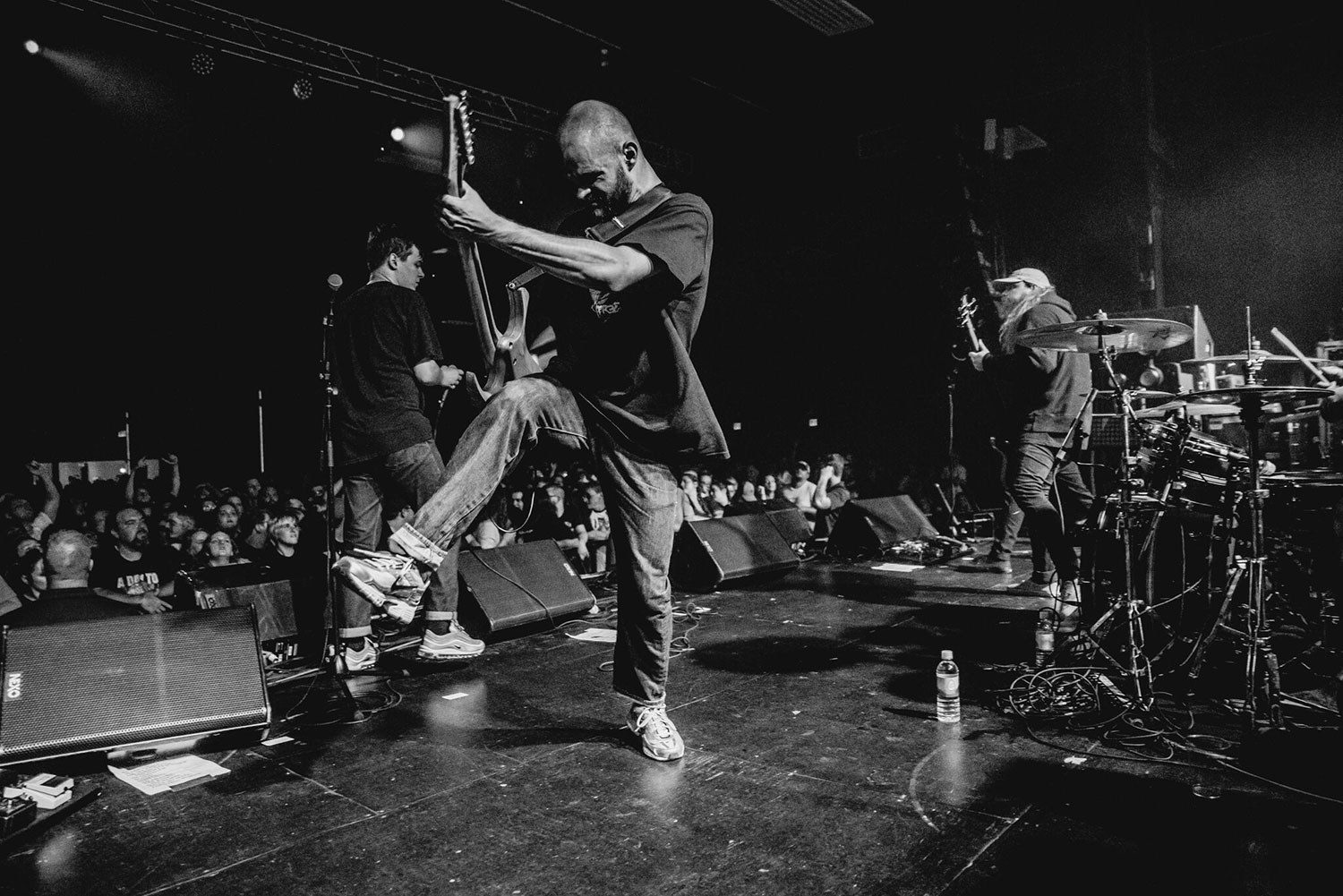 Piecing ‘A Different Shade of Blue’ together was an altogether different experience compared to the live setting they used for ‘Laugh Tracks’. This is Knocked Loose entering the realms of decisiveness, making every move to be as dangerous and as brutal as possible.

“It’s been interesting over the past couple of years to see where Knocked Loose can exist without changing what Knocked Loose is,” he says. “With the kind of band that we are, there’s so much we can do without changing the integrity of the band. On this record, we tried a lot of new things that we would have been too scared to try in the past.”

Since growing bigger than their scene in Kentucky, where the sound that’s pushed them to the next level was the product of circumstance – genre restrictions, and a joint understanding of what each of them actually wanted from a band – moving to the next chapter was another easy decision, but one that required focus on remaining just who they are.

“It stemmed from a personal desire to experiment more,” Bryan states. “We didn’t want to write the same record again because we thought that formula might get boring.”

Boring is certainly not a word associated with Knocked Loose. ‘A Different Shade…’ is a no holds barred affair. It capitalises on everything ‘Laugh Tracks’ brought, and drags it down into the murky darkness filled with chugging guitars and maniacal, demonic screaming.

Not for one moment do you hear any breaking in the formula, even if that promise they rose with a couple of years ago was “a huge surprise” for the five-piece.

“I don’t think any of us thought it would get as big as it did. Everything is still constantly surprising us, but it helped keep us humble. We were just so grateful for the opportunities we were getting, and we wanted to make sure we weren’t taking advantage of anything. Because of that, it’s helped us keep a level head because we still don’t know what to expect going forward.

And in the supremely nonchalant way that only Bryan can say it, his views on being branded one of the most exciting and genre-driving bands for hardcore is one that’s integral to the DNA of Knocked Loose;

“No, I don’t necessarily think we’re reinventing anything. I just think we’re playing the stuff we like to listen to and what we want to hear from other bands.”

Taken from the September issue of Upset. Knocked Loose’s album ‘A Different Shade of Blue’ is out now.