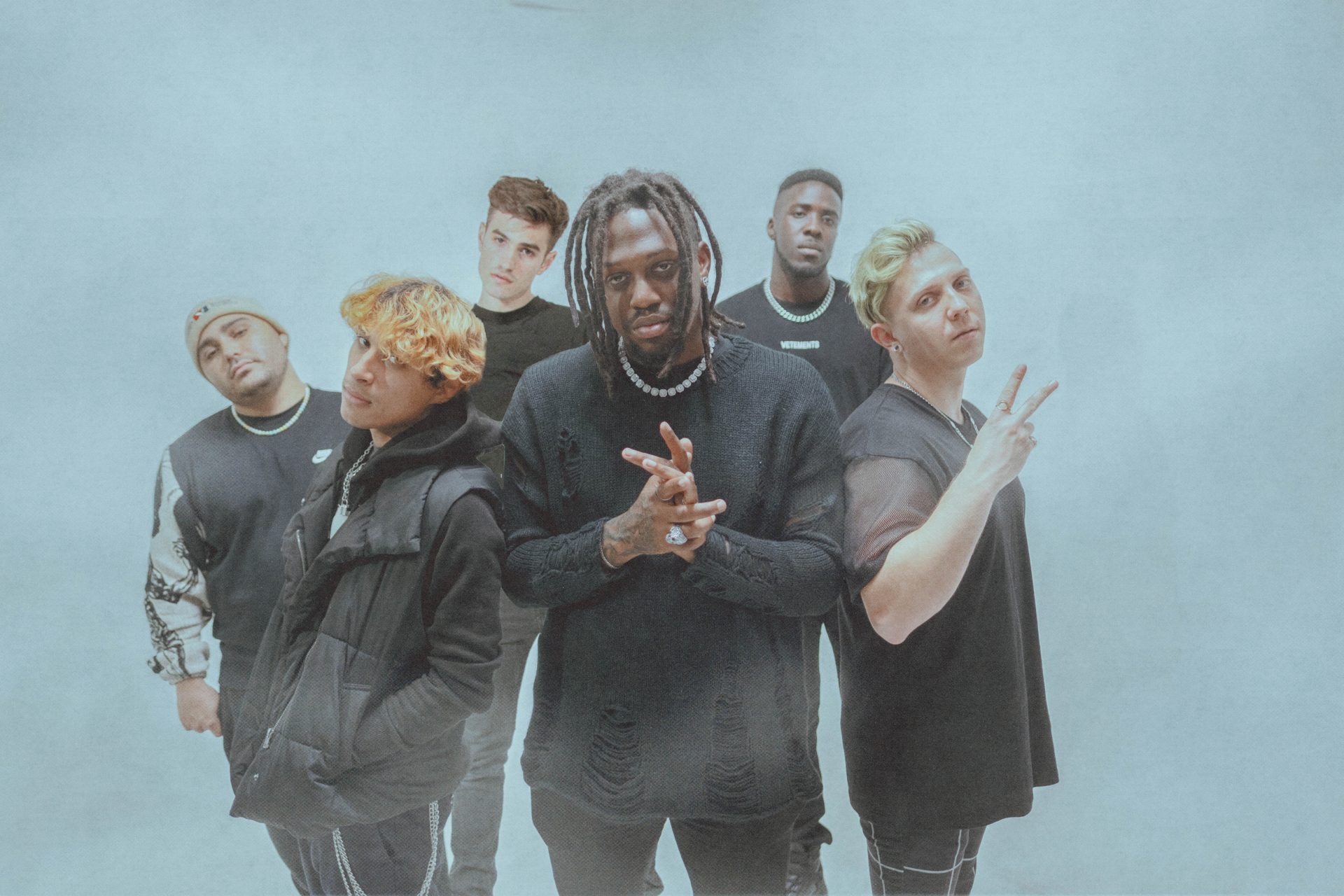 Magnolia Park: “We’re creating our own lane, our own way”

Magnolia Park had a breakout 2022 with their ambitious debut album, ‘Baku’s Revenge’, so how do they feel about shaking awake the pop-punk guard?

If you flicked through the record collections of Magnolia Park, you’d find cult hip-hop groups like Three 6 Mafia wedged between pop-punk giants A Day To Remember and Neck Deep. On their debut album, there are interludes inspired by drill pioneer Chief Keef next to tracks featuring emo icon Derek Sanders of Mayday Parade. ‘Baku’s Revenge’ is an album for the outcasts, so how do they feel about shaking awake the pop-punk guard?

“There are definitely some older rock heads and elder emos who’ve been like ‘they’re not pop punk’ and ‘they shouldn’t be here’, but we don’t let it get to us,” says vocalist Joshua Roberts from his home in Orlando. “We’re just creating our own lane, our own way, and some people may not get it yet, but for those who do, we appreciate them so much.”

They pull no punches in waging war against those who aren’t jumping on the bandwagon, of those afraid of change. Album opener ‘?’ lets its titular character Baku take centre stage, firing shots at their critics. “I hear y’all saying Mag Park ain’t punk” and “If I hear another motherfucker saying Mag Park is a TikTok band, I’m beating their ass” prove they’re not robots; they’re humans hitting back.

“We got the idea from a Chief Keef record, and groups like Three 6 Mafia who do those types of interludes. We wanted to bring that to the pop-punk world because you don’t hear that in this genre at all; we wanted to make sure that it was a statement that people would remember, not just to say ‘oh, this is just another interlude’.”

Baku’s album-invading interludes, voiced by Jay Webster of hardcore hip-hoppers UnityTX, are just part of the world-building that takes place. Having laid a trail of breadcrumbs for listeners to follow like Sherlock Holmes on a case, they’ve teased out the character’s arrival, before unleashing him upon their audience on ‘Baku’s Revenge’.

“It’s just another instalment of what Baku can do. It’s a little world we’re creating right now which is obviously going to expand in the upcoming years; it’s another instalment of Baku’s head and what goes on in there, the mischief that he can do. We think of Baku as that one character that stirs up the trouble that needs to be stirred up.”

It’s not the first time they’ve used characters to channel their traumas into, nor is it the last time they’ll all appear. “In our earliest EP we had Pumpkin Eater, and on ‘Halloween Mixtape’, we had the Reaper and Houdini and all these other characters who are gonna make the return pretty soon, but right now, it’s all eyes on Baku.”

You might think a pop-punk band throwing out concept records is a little crazy, but there’s a method to Magnolia Park’s madness. Baku, Pumpkin Eater, and the Reaper aren’t just characters to cheer on, but vehicles for Magnolia Park’s songwriting. “I study a lot of films and a lot of TV shows, and there’s always that one character that’s so out there, and they say everything the other characters are thinking.

“But since they’re so out there, and so comical, people overlook it, but the message is there. You have to rewatch it again or relisten to it again until you’re like, ‘oh wait, they really mean this’, even though it’s in such a comedic way.”

‘Baku’s Revenge’ is an album that explores life’s highs and lows. It doesn’t shy away from the skeletons in the closet, exploring several levels of addiction, experiences of racism and abuse, broken homes and relationships, and mental health. So, while the likes of ‘Feel Something’ and ‘I Should’ve Listened To My Friends’ are festival anthems in the making, they wear their traumas like hearts on their sleeves.

“I believe that our traumas don’t shape who we are, but they do have a big influence on who we are,” the singer confesses like a wise philosopher. “I came across this quote that’s like ‘your past traumas don’t predict your present, while your present will predict your future’. You have these traumas, and you shouldn’t let them control how you are.

“There’s a lot of people who’ve had a lot of traumas in their lives that let that consume them and take over, and they can’t move past it. So, when we sing ‘we’re all addicted to our traumas’, that’s just how we all are. We’re addicted to that one traumatic experience we can’t get out of our head even if it’s years or decades down the road.”

Don’t worry, readers, ‘Baku’s Revenge’ doesn’t wallow all the way through. It’s an album about self-care, self-development, and self-love. Ultimately, Magnolia Park are a band about growth. “We can’t let those traumas define us and can’t let that depict what our future is going to be. The best type of therapy session you can have is really just being able to write about it, sing it, put it out, and then let the world hear it and make their own interpretations of it; it’s definitely our own little therapy session for the world to listen to.”

The thing we all forget about therapy sessions is that they’re not all about the bad times. To get to the bottom of why we’ve hit rock bottom, we have to revisit the good times too. And Magnolia Park are no strangers to sharing the highs with the lows, as they do on tracks like ‘Addison Rae’ and ‘Radio Rejects’.

“We didn’t want an album of just one type of emotion; we wanted people to really go through the rollercoaster of emotions like they would in life. There are those times when even in a depressive state, you have that one time where it can be a moment, a whole day, even a week, where everything is fun, and you’re having a good time – that’s where ‘Addison Rae’ comes from. We wanted to make sure that there are a lot of polar opposite songs that still fit together, as that’s how life is; there are a lot of polar opposites that you go through throughout the day, but at the end, you’re still here.”

None of this would be possible if Josh – joined by bassist Jared Kay, drummer Joe Horsham, guitarists Freddie Criales and Tristan Torres, and keyboardist Vincent Ernst – didn’t assemble a team around them that resembled the Avengers of pop-punk and alt-rock. Whether that’s teaming up with A Day To Remember and Neck Deep mastermind Andrew Wade or collaborating with Mayday Parade’s Derek Sanders and country-gone-rock up-and-comer Taylor Acorn, it’s that team spirit that elevates ‘Baku’s Revenge’.

“Having a good team creates a world of difference. The fact that we’re so young, we’re still very new to this world, yet have such an amazing team on hand – it just makes everything better. Working with Wade was a big moment, like ‘wow, we’re really in a room with someone who’s created songs I’ve covered at shows – it was a powerful moment for me.”

They’re no strangers to picking up tricks and tips from other genres, and their love of collaborations comes straight out of the hip-hop playbook. “The majority of us are big fans of hip-hop, and we know that they do not stray away from collaborating with each other. Friends in the industry just come together and make music they love.

“We looked at the pop-punk scene, and we realised that there wasn’t a lot of that going on. Yeah, there are bands who are friends with each other and who like hanging out, but you really don’t see them doing songs together and creating art. We wanted to start doing that, to bring a bit of that hip-hop element over into the pop-punk world.”

What makes Magnolia Park different from every other pop-punk band is the fact they’re not your typical band. They’ve grown up in the scene, not seeing a single band like themselves. When you’re the outsider in a community of outcasts, it grants you new perspectives on classic tropes.

“Whenever people look at us, the first thing that they say is, ‘oh yeah, they’re not the typical pop-punk people’,” Josh sighs, reflecting on the gatekeepers who’ve tried their hardest to keep them out. “Growing up, I didn’t have people who looked like us to really look up to whenever it comes to this style of music, so now I’m being that person that kids can now look up to and go ‘oh yeah, I want to do this because I see someone who looks like me doing this’ just feels good.”

Along with the likes of Pinkshift and Meet Me @ The Altar, Magnolia Park are looking to change the tale of the tape. They’re coming for pop-punk’s white, male stereotypes, and they’re not afraid of upsetting anyone in a community they care deeply about.

“Now there are so many other bands that are like us, that are full of people of colour who want to do this style of music and get out of that shell, out of that hiding place. It’s beneficial to the community and to the scene, and we’re only going to thrive more now that this is coming to fruition.

“Each of the bands coming out right now, especially those that are POC, they’re genre-bending. It’s not just straight riffs and straight drums; we’re mixing all these worlds together and creating something fresh again, and that opens the ears to many other people who wouldn’t even think to listen to this style of music.”

On ‘Baku’s Revenge’, Magnolia Park is creating a community of outcasts, empowering them to push for change in their local scenes. When the message is just as infectious as the bangers that bind them, there’s no way you can deny Magnolia Park from reaching the masses.