“One of the songs is called ‘I haven’t changed my underwear in three days and I really need to shower’,” continues Em Foster.

“Are you laughing at your own joke,” asks Becky.

“Well, you’ve got to be your own biggest fan,” grins Em.

We’re backstage at Reading Festival with Milk Teeth. Any hints of a turbulent few years remain firmly a distant memory following a powerful opening set on the Main Stage that proved just how brilliant the band is, whatever the circumstances. And what better way to celebrate than by answering a bunch of our questions.

Hello Milk Teeth. That was a fantastic set. It felt like you put a lot of care and attention into it.
Becky: We did really try and put a lot of conscious thought into it just because it was a special one. We could have just gone and done what we normally do and I feel like that would’ve been okay but why not use the platform to try something different and give people a bit more of a show. You can’t promise that you’ll get to do it again. You’ve got to make the most of that opportunity.
Em: So we were like, let’s have loads of fun with it. It was awesome. It definitely made it feel a bit more nerve-wracking than I think that it would have done if we hadn’t spent so much time like prepping and getting the set in order. We wanted to go on the Main Stage playa Main Stage set and be a main stage band. As much as we are a punk band and we’ll happily play clubs forever, when you get on a stage that big, you’ve got to do a main stage thing. It would almost be disrespectful to come on and do anything else. 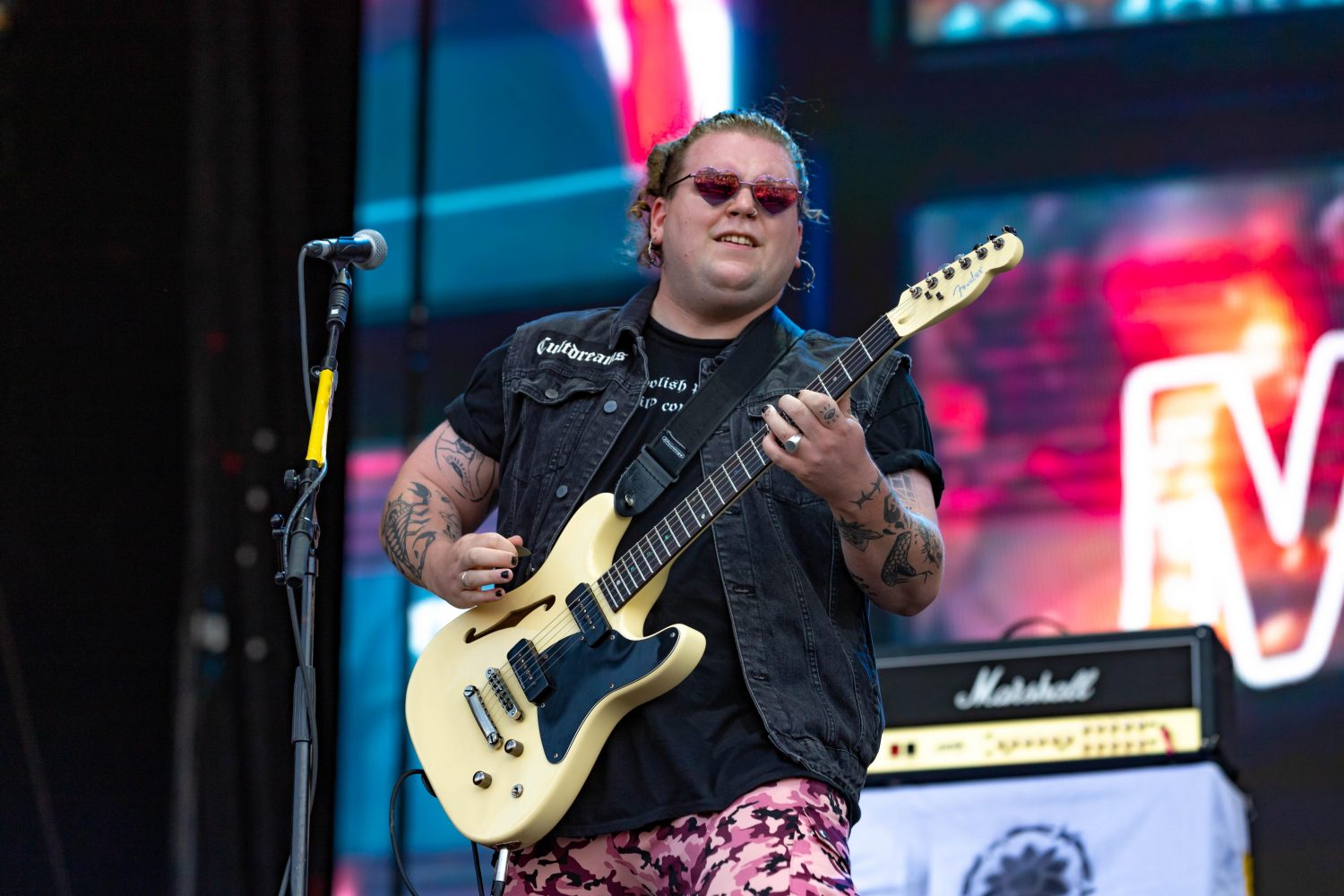 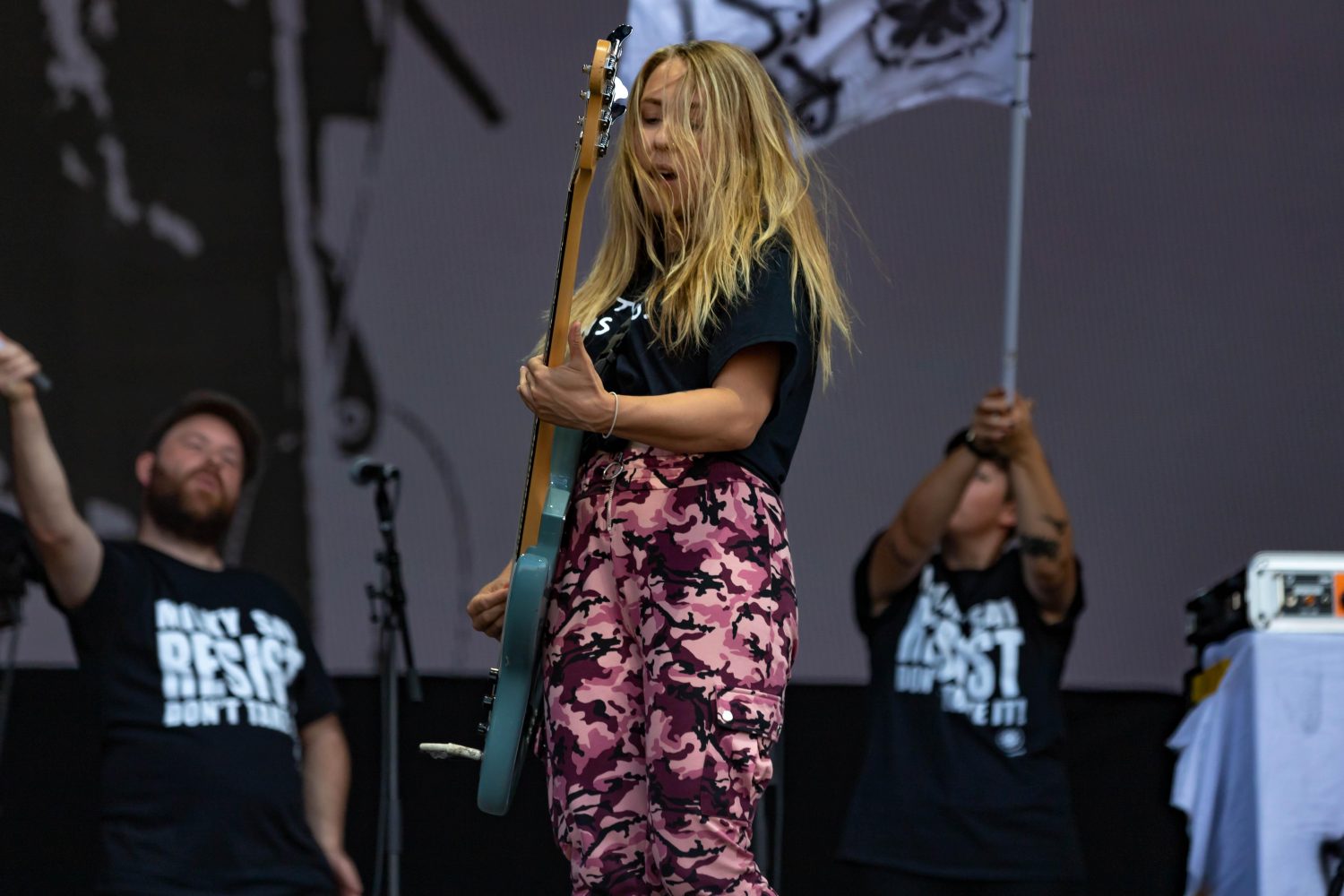 And you’ve signed a new record deal and the album is recorded. Can you tell us when it’s out?
Becky: I’ve been telling people anyway, so I’m going to carry on. It’s out early next year but there’s a bunch of singles before that. I’m so excited because with this record, we had the freedom to be like, ‘this is how we sound, this is the record’ and not have anybody say ‘maybe it should be a bit more commercial or maybe it needs to be way more produced’. We did the opposite and stripped everything back. We wanted it to sound as close to how a live recording sounds as we can.
Em: When we give production references, Becky and I always say the same stuff. It’s Pixies, Placebo and Nirvana.
Becky: I wanted to keep the breaks. My favourite bits of my favourite songs are things like when Kurt’s voice breaks or when there’s a little twang or something interesting in the recording. I didn’t want to hide all that. Don’t auto-tune anything. My voice is as good as it is on the day.
Em: That’s the humanity of it.
Becky: This record has been about trusting your gut instinct. As long as we’re happy with it, and I can be proud of it, that’s good enough for me. The record definitely chronicles the past few years, from being in a not very good place to finding empowerment and having a voice again.
Em: It’s screamer of an album. It’s fiery and fun, and it’s angry.

Becky, it feels like you’ve started getting more confident in your voice on Social Media. Is that ‘cos of Em or is it a reaction to the state of things?
Becky: I definitely got in trouble for being outspoken in Milk Teeth in general, long before I met Em. But when things weren’t great in the band previously, I definitely lost my voice for a really long period of time. I was there but I wasn’t there, if that makes sense.
Now though, we have a new team and new members and I actually feel like I have the support that I needed the whole time really. I do feel confident enough to be like, ‘this is what I think and this is our band, this is what we’re trying to do and this is what we believe in’. I want to use that platform in a positive way. And yeah, Em’s definitely had an influence on that. I felt like it was already there, I just needed the support.
Em: The way I see it is, before we were quite conscious of not putting too much of the crowd off by having opinions about stuff. We tried to play it safe. The thing is, when I’ve compromised on the message or what I feel is right, I end up just feeling really uncomfortable and hating what I’m doing. There’s no way you can make good music like that. There’s no way you can play good shows like that. There’s no way that you can be the best you can be if you aren’t willing to be true to yourself. I’d rather be comfortable and make good music than uncomfortable and sell more records.
Becky: It’s nice not having to censor myself 24/7.