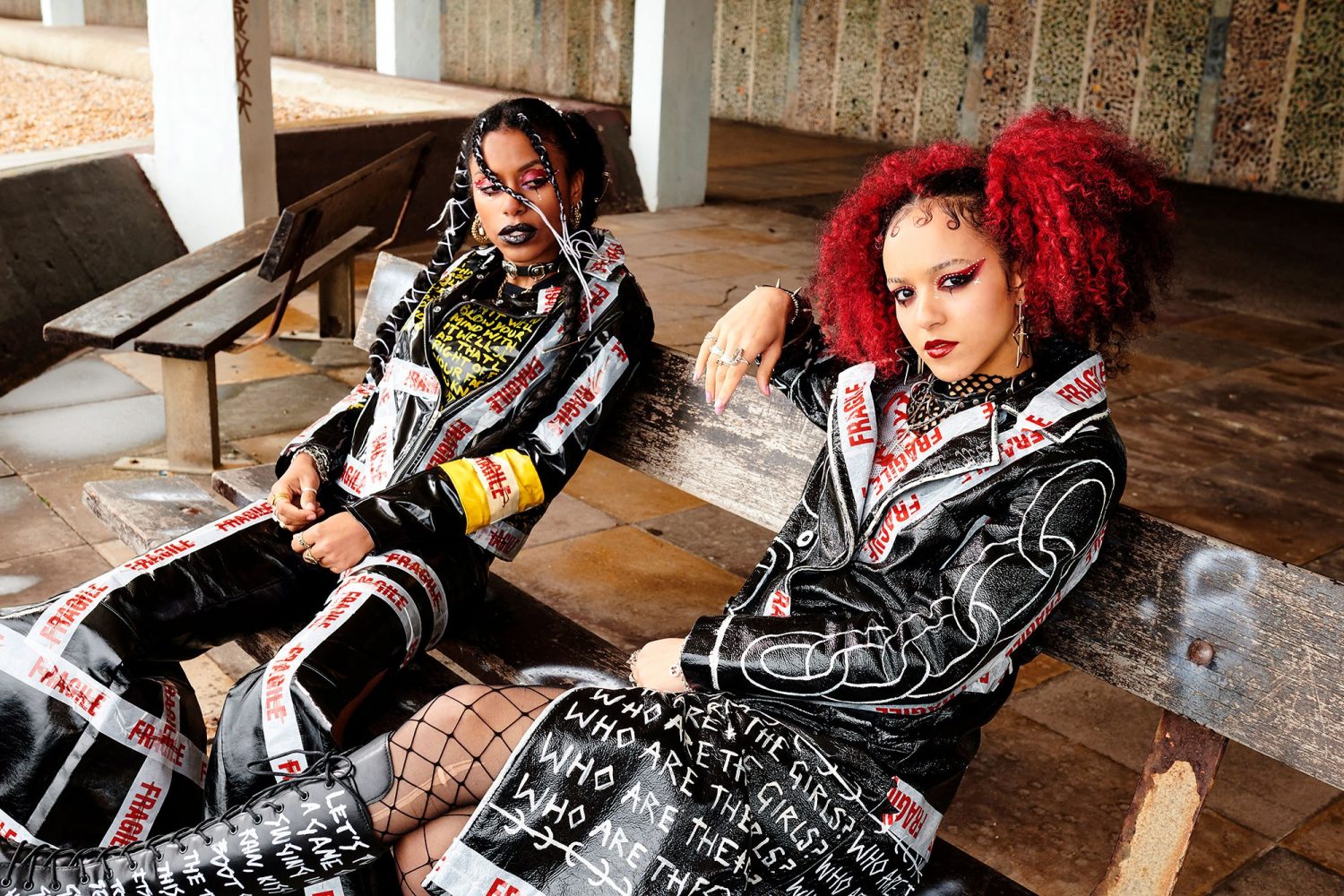 Nova Twins: “We want people to listen to ‘Supernova’ and feel like they can take on the world”

Nova Twins aren’t just the future of rock, they’re the present too – and with their new album ‘Supernova’, they’re here to prove it.

If you have any consciousness regarding the current climate of rock, then you’ll already be more than aware of Nova Twins.

As childhood friends, Amy Love and Georgia South have spent close to a decade building their name in the UK rock and punk scene. In 2020, they released their kinetic, supercharged debut album ‘Who Are The Girls?’ – an in your face declaration that has forged a much-needed path. With no synths in sight and an adoration for guitar pedals, its incomparable composite of nu-metal meets electronic-tinged hardcore was both built in and made for the live environment. And then a global pandemic struck.

Nova Twins persevered, and despite not being able to feel the tangible fruits of their labour, they still managed to solidify their status as one of the most exciting, expectation-defying and pioneering bands around. They collaborated and toured with Bring Me The Horizon, picked up the accolade of Best Breakthrough Band at the Heavy Music Awards, and even gained a fan in Rage Against The Machine icon Tom Morello.

At the time of writing, the duo are on tour with another rock zeitgeist, YUNGBLUD, Nova’s first proper tour of Europe, having only toured France a few months prior.

“This year’s been a great journey for us. We’ve never been able to tour this much,” Georgia explains. “It’s the first time we’ve been able to do a big headline tour across America and France and the UK. It’s been great to finally see our audience in person and actually see what our audience looks like. They look amazing. They’re so diverse and so lovely and welcoming to all our supports that we bring out. It’s been really good fun.”

The band are currently promoting the ferocious follow-up to their debut, ‘Supernova’ – an empowering goliath that sees Nova Twins elevated and open to a stratospheric future.

“At first, we were worried and panicked like a lot of bands, but we persevered and carried on,” Amy says, reflecting on what it was like to promote their first album during the pandemic. “You have to adapt in this industry anyway, so [we did that]. We suddenly became this band who went from doing loads of punk shows, to existing only online. We made the most of it and got to know our audience. We set them little challenges, we’ve done art together and made clothes together, riff challenges… it really helped the time go by, and of course, we got stuck into the album. We just adapted to our environment, and through thick and thin, we’ve always got to keep moving forward.”

‘Supernova’ came to fruition during lockdown “after watching loads of Netflix and wallowing in our own self-pity.”

Amy continues, “We just had to do something. The first song [was written] around Black Lives Matter, and a lot was going on with the marches. We did a few protests and made a couple of speeches at one of them. We had so much to say and had a lot of feelings as well. After that, Georgia sent this incredible basis of ‘Cleopatra’ over, and I was just like, oh my god, this sounds so amazing. It’s fresh, it sounds powerful, like the moment of what we were interacting with at the time. I sent it back with some lyrics on top, and then we to-and-fro’d it until it was the song we wanted it to be. Once we were happy with that, it gave us a new lease of life; a new energy to be like, even though we’re in this lockdown, we can still write, we can still move forward. And we did. It was the catalyst for the album.”

The duo used writing ‘Supernova’ to process the viscous atmosphere, not just in relation to the world but also in their own personal lives and journeys, a therapeutic exercise that provided a space to explore and expand. The abundance of time in lockdown meant the process wasn’t rushed either, as Georgia explains. “The first album was very much, this is who we are in terms of playing everything raw, how you’d hear us at a festival. ‘Supernova’ feels more intimate in a way because we did write in our bedrooms in a very small space. We had that time to play around with sounds, buy more pedals, and just really think about dynamics and not be afraid.”

Every inch of their new record feels fresh, reflected even as the band are able to promote it without restrictions. “Because we missed out on the first album, this feels almost like this could be our debut as well,” Georgia exasperates as Amy laughs alongside her. “It feels amazing that we get to do this one almost from scratch again,” she adds.

Now two albums deep, the aptly titled ‘Supernova’ will surely see Nova Twins climb to even higher successes. Yet the journey up the ladder doesn’t seem to phase them at all, as their DIY community ethos is still at the core of who they are. They’ve even continued with their various sociopolitically focused projects, including Voices For The Unheard, platforming alternative POC talent – created online, it now exists in real life as they bring the artists involved out on tour with them. It’s even led to one artist signing with Nova’s own publisher.

“For every band, no matter what position you’re in, there will always be obstacles. You’re always going to look for the next thing.” Amy says about her band’s trajectory. “I think because we’ve been a band for such a long time, we knew we had obstacles just for being who we are: women, women of colour, making rock music. The first time, it was definitely trickier, and now it’s nice to see the industry opening up more, opening up the conversation more, being a little bit more versatile in what can be what.”

“We’re appreciative of everything because we’ve been going for a long time. We always had our mind set on being like, it doesn’t really matter [what happens], we’re always gonna go forward anyway. We made that decision, whether we’re huge, whether we’re going to be small – anything that comes now feels like a bonus. We understand the hard work it took to even get to this point. It’s not easy for bands to keep moving forward in this climate, especially when [there’s] not that much money. It’s fucking pinching pennies all the time.”

Has the music industry always been receptive to a band so unapologetic? “I think the audience was, and I always say we’re a band’s band,” Georgia says. “The audience always accepted us. We came up in the punk scene through festivals, so it’s more the industry that had the confusion and kickback of like, where would we fit? What music is this? They don’t look like what we’re used to rock looking like? That was the only pushback that we had. [Our] audience and community kept us going.”

“Even the deal we’ve done with Marshall [Records] is not your conventional deal. It’s really artist-friendly, it’s more of a partnership, so it’s like part brand, part label. It’s a deal that hasn’t really been done before. So we still make the decisions, and they give us advice if we need it, but they definitely let us just run with our thing,” Amy adds, with Georgia quickly chiming in, “We’re still DIY, we still make our own outfits. We’re still literally up to 5am the night before!”

Ultimately, Nova Twins want to continue to empower their fanbase and beyond with the same fervour that has led them to where they are now, having always had the odds stacked mostly against them.

“We want people to listen to ‘Supernova’ and feel like they can take on the world and do anything, because that’s what it was for us,” Amy concludes. “Whatever we were going through in lockdown, it really got us through, and is an honest reflection. It’s not always fucking rainbows. It definitely gets dark inside the world of ‘Supernova’, but there’s always a sense of triumph and a way out of that.

“We hope that when people listen to it, they get that main character energy too. Seeing two girls of colour playing the kind of music we’re playing, and saying we can exist in this space – that means you can exist in any space. We’re starting to see the diversity across the board. When we first started, there was none of that. We’re finally getting that now. What we set out to do is materialising, and it’s such a beautiful thing to see.”

Taken from the July issue of Upset. Nova Twins’ album ‘Supernova’ is out now.