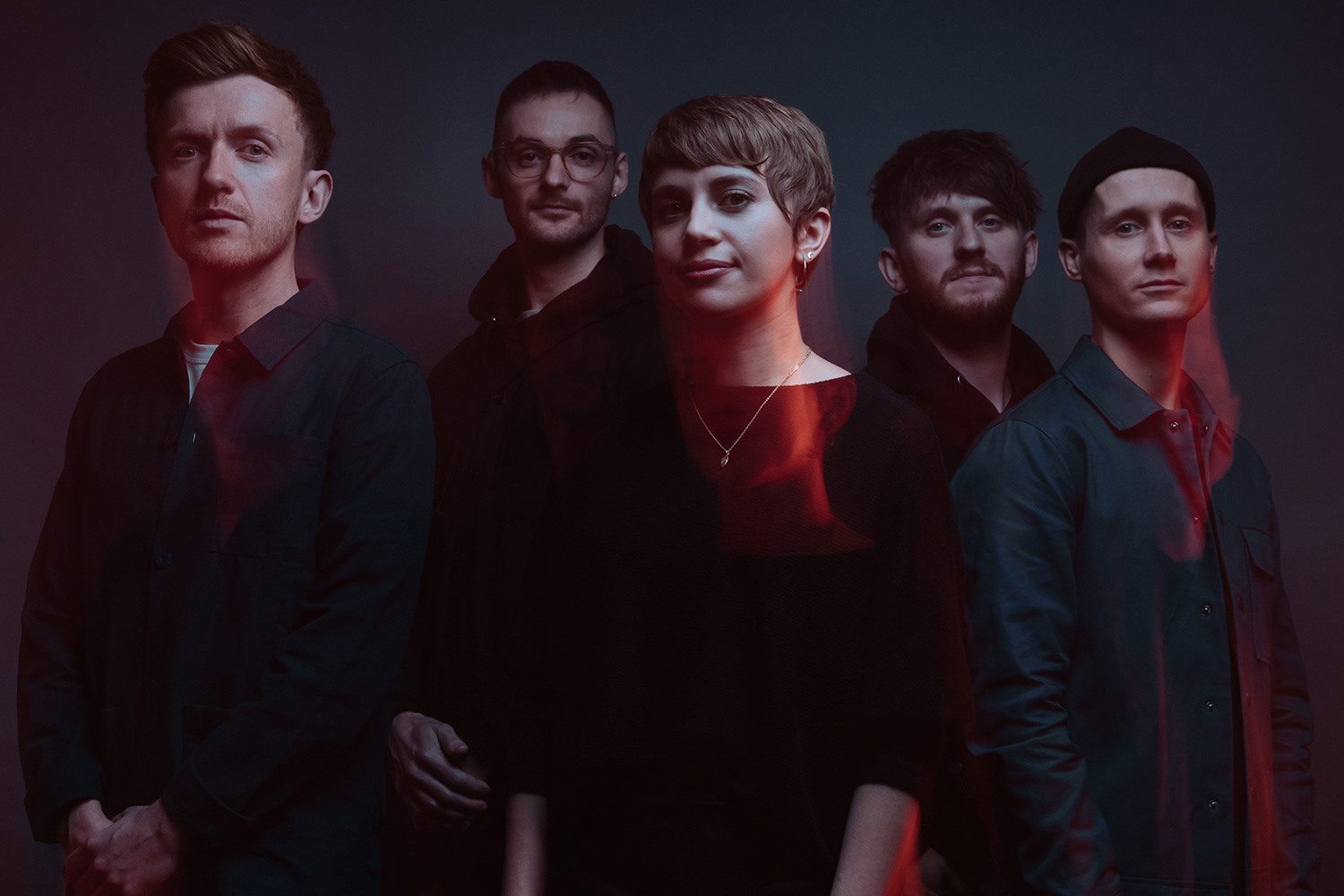 To be going strong as a band after 17 years is an impressive feat; to also be releasing the most ambitious record of your career after all that time even more so. Yet, Rolo Tomassi have always seemed like a rarity, pushing boundaries and following their own path. Which is, perhaps, why, six albums in, they can still produce a body of work as staggering as ‘Where Myth Becomes Memory’.

“On the whole, it’s a more confident sounding record because we know what we want now,” explains keyboardist and vocalist James Spence. “We’re a lot more confident in getting rid of ideas that aren’t working because, after everything we’ve gone through to get to this point, we need to keep raising the bar for ourselves to keep this worth doing. If the record we’re releasing isn’t better than the previous one, why would you carry on? There’s got to be a sense of accomplishment and satisfaction in the music we’re writing.”

Though Rolo Tomassi have been seen as an important fixture of the UK alternative music scene for a long time, known for their chaotic, almost impossible to categorise sound and their incendiary live shows, it was the release of 2018’s monolithic ‘Time Will Die And Love Will Bury It’ that truly marked a shift for the quintet. Their most expansive work to date built further upon what predecessor ‘Grievances’ had done in ditching the more oddball quirks of their sound for huge cinematic soundscapes without compromising the moments of crushing sonics and frenzied experimentation.

It became their most critically acclaimed album to date, achieving near-perfect reviews and landing them the second-highest review score of 2018 on Metacritic (92/100, if you’re wondering). Rather than feeling daunted about the prospect of following that up, the success of ‘Time Will Die’ instilled in the band a sense of self-confidence that they could now try bigger and bolder things on their next record.

“The response to ‘Time Will Die’ justified certain decisions we’d made towards songwriting and how we approach writing an album,” says James. “It felt like people got more on board with what we were doing, and that renews your enthusiasm for what you do. I suppose that’s one of the things that’s kept us together for 17 years, seeing people getting excited and having that lift you up to where, even at the end of a record cycle like that, we still felt we had more to do and more to offer.”

For vocalist Eva Korman, ‘Grievances’ and ‘Time Will Die’ represented the band truly finding their stride with writing, and thus ‘Where Myth Becomes Memory’ became the final part of an unintended trilogy. “Those records felt like a departure from what we had released before, so we approached this one from the beginning as a closing statement to this collection of music. It was just before we had started writing this one that we decided that it made sense to close off those records as a trilogy.”

As the principal lyricist, Eva was best placed to identify the thematical links between each record, which cycle through darkness to light and promise; much like the band’s sound, which carefully balances shadow and brutality with moments of glittering hope and beauty within the space of one song.

“Lyrically, ‘Grievances’ was a reflective and dark record which transitioned into ‘Time Will Die’ with themes of letting go, coping and forgiving,” Eva explains. “For ‘Where Myth Becomes Memory’, I didn’t want to look back; I wanted to focus my energy on exploring where I was instead. The themes for this record are renewal, rebirth and new beginnings.”

This sense of not wanting to look back was perhaps driven by the emotional toll the writing of ‘Time Will Die’s’ lyrics had on Eva, something she describes as “an exhausting process”. “I wanted to make sure that going into this one, I didn’t get too sucked into what I was writing about. I think partly that was what pushed me to change my perspective from reflective to explorative.”

Ready to move forward, Rolo Tomassi set to work on this final part of the trilogy. They already had one challenge to overcome in that Eva had moved to the US, but, undeterred, they powered ahead – they were already used to writing music separately and sharing ideas back and forth, plus the plan was that Eva would be able to fly back and they’d get together in the studio.

“It’s been a really long time since we’ve all lived in the same place as we’ve been split across a minimum of three cities for the last 10 years, so we’ve always had to write over email to a certain extent,” says James. “I suppose we kind of bullet-proofed ourselves ahead of a singer moving to the US and a pandemic!”

“We’re not the kind of band that gets together in a practice room all five of us to work on a song together; I wouldn’t want to hear that song,” adds guitarist Chris Cayford. “The nuts and bolts of how we write have always been the same; as much as it sounds like your singer moving to the other side of the world would be a huge blocker, weirdly, it hasn’t changed too much. The main difference has been recording: usually, that’s where all these separate pieces will connect.”

Unable to work on that connection together in the studio due to global circumstances scuppering plans, Eva was forced to record her vocals remotely at Brady Street Recordings in New Jersey. Yet rather than hinder their process, the band found a fluid way to work that used these conditions to their advantage.

While James, Chris, bassist Nathan Fairweather, and drummer Al Potts recorded together at The Ranch in Southampton, via the magic of technology, their producer Lewis Johns listened to Eva’s sessions over 3000 miles away and spoke to the sound engineer in New Jersey. Tackling the time difference, Eva would record her takes, share them with the rest of the band, who would provide feedback, and then the next day, when they returned to the studio, the new takes would be ready to listen to.

Describing the experience as “the most prepared I’d ever been before going to record,” the luxury of time meant Eva was able to record her vocals without pressure, important for preservation given the range of her astonishing vocals, which range from guttural howl to angelic harmonies. Meanwhile, the boys were able to experiment and add extra details. “We were able to play with additional electronics and layers and weird stuff: at one point, we were playing around with the strings on a piano, hitting them with a wrench,” recalls James.

Despite the extra time to play around in the studio, the band were determined not to overcomplicate things too much. Known for the complex, multi-layered nature of their sound, there’s always the temptation to add in a few too many flourishes, but ultimately that’s not what Rolo Tomassi are about.

“We’re not virtuoso musicians; there are no guitar solos coming anytime soon,” laughs Chris. “It can be complicated, but it can’t just be complex for the sake of being complex; it needs to work as part of the song, we don’t want to punish the listener!”

“Chris gave a really good analogy once in an interview years ago that’s always stuck with me,” James recollects through laughter. “It’s the Gok Wan approach to songwriting. If you feel like there’s too much going on, you’ve probably added one too many accessories – always take off the last thing you’ve put on.”

“Seriously though, I’m very against things being showy just for the sake of it; it’s just posturing. The main strength of what we do is in the arrangement, and that’s something we all do together and feel very comfortable with and understand each other. I suppose that factors into the strength of our unit and how we’ve been together for so long. There’s heart and soul and meaning to what we’re doing, and anything technical is there because it’s absolutely the right musical choice.”

Taken from the February issue of Upset. Rolo Tomassi’s album ‘Where Myth Becomes Memory’ is out 4th February.