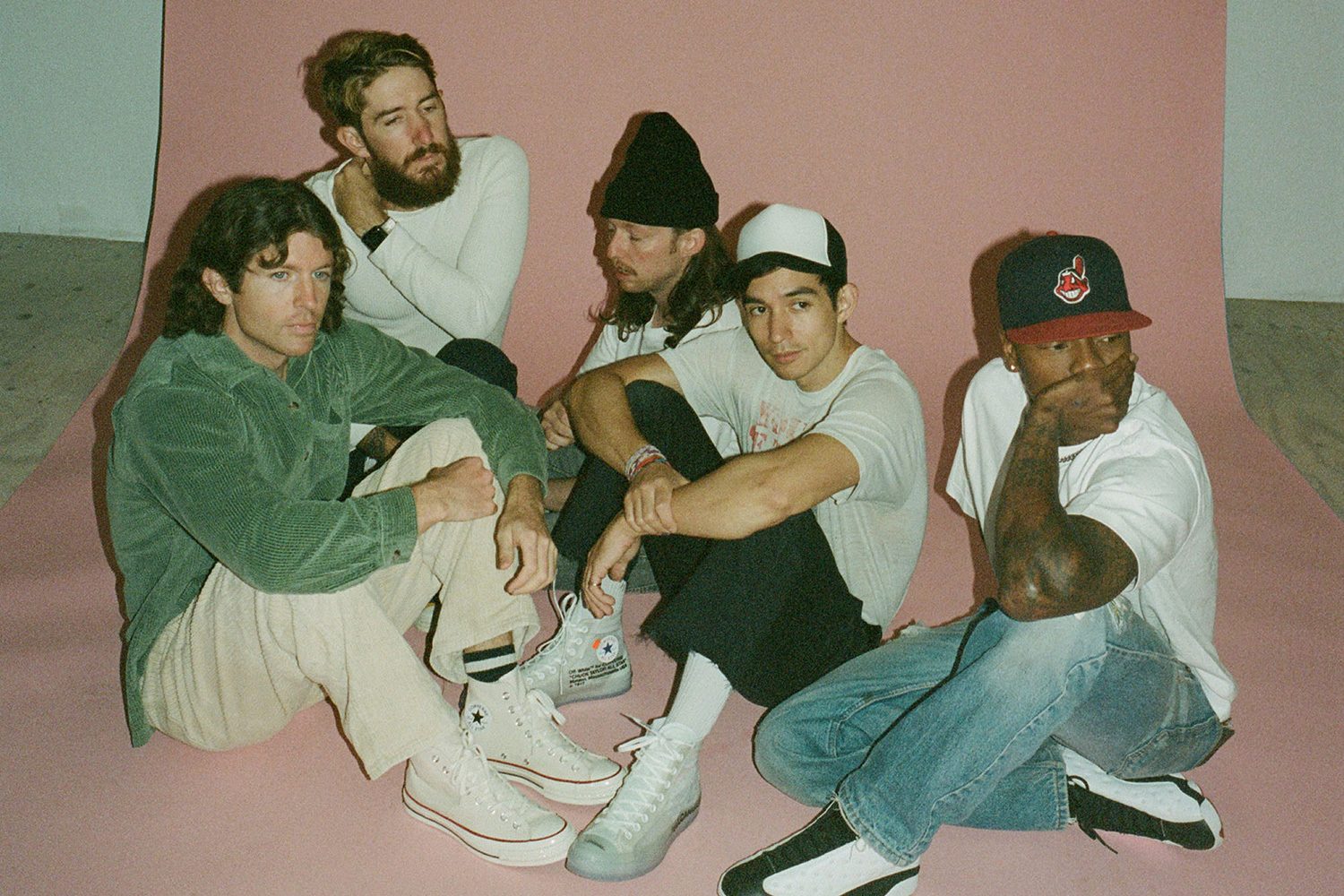 Turnstile: “The hardcore scene allows freedom to be who you are”

Nobody is doing it quite like Turnstile. The hardcore darlings are always finding new ways of bending and breaking any form of expectation. Consistently on a breakneck trajectory, in their short years, they’ve managed to become lauded sons of hardcore. Fearless of breaching the genres often restrictive nature, this time, they’ve burst the dam.

“I love connecting dots in music, and I love being able to feel inspired by something,” vocalist Brendan Yates begins. “But also how to take that and make it work with the tools that we have in being Turnstile.”

It’s very easy to argue that the reason Turnstile have captured so many hearts while twisting and turning their essence into often unrecognisable sounds is down to one fact; they vow to never be the same band. Put simply, since forming in Baltimore, Maryland, the five-piece, completed by Franz Lyons (bass), Brady Ebert (guitar), Daniel Fang (drums), and Pat McCrory (guitar), are a perfectly sized jigsaw showing the world the bigger musical picture.

Over the years, they’ve had a fair go at getting to this point. With a handful of EPs, two albums, including 2018’s acclaimed ‘Time & Space’, which saw the group begin to push their boundaries, they’ve been carving their space. That’s not to mention countless tours, taking in everything from sweaty, combustible club shows to spots on hip-hop curated festivals. Turnstile seem to have limitless energy on their search for whatever’s next and leaving no stone unturned.

This is exactly what they’ve done with ‘GLOW ON’. Their third outing proper, the world’s first introduction to this new age of Turnstile came with the surprise release of EP ‘TURNSTILE LOVE CONNECTION’ back in June, and its accompanying 11-minute short film.

Still toting that same hi-octane sound that consistently threatens to shatter speakers and tear down walls, the attitude that screams through their music hides away when chatting to Brendan, a cool nonchalance echoing through every studious answer. To reach the point of his on-stage presence, stomping and clattering amidst the band’s maelstrom is a masterclass in just loving tunes.

“In a lot of ways, my attitude is very open to trying new things and open to all kinds of inspirations,” he reasons. “I think listening to music as well, I love being able to find inspiration in things that are so far from things that I’ve experienced already in my life musically. There’s a lot of invisible dots to connect with music and the way that people relate to it. It’s always exciting to find those dots and connect them, and everyone connects those dots in different ways, I feel.”

Dots are a recurring theme in Brendan’s mind. It’s this metaphorical dot-to-dot which is the reason nothing Turnstile put their name to feels like a troubled birth. There’s no push and pull of these ideas floating around their collective heads, no exorcism of rotating heads and digressing creative license; instead, it’s a perfectly syncopated, albeit the occasional failure to start, embracing of a love for music. The same reason people, say, pick up music magazines to see what the hot goss is: there’s an overwhelming higher power that just keeps you hooked.

“The group having a wide range of music that we all like, and I think everyone likes different things,” Brendan ponders. “But at the same time, when we come together, not everything works all the time. When it does work, a lot of times, it’s not anything that necessarily would be expected on paper, but it feels good to everyone because we all sometimes unexplainably connect to whatever the idea is. That’s the idea that’s always worth seeing through and trying to bring into life, even if it’s not typically that groundwork musically, it’s not already laid out as far as something we’ve already done.”

‘GLOW ON’ is a perfect example of all these rotating cogs clicking into place. An album that’s still deeply rooted in hardcore, it’s the arresting moments that steer away from their homestead that are most interesting. They not only defy expectation but lay the metaphorical plank of wood between cement blocks and jump till it snaps. Within, you’ll find an embracing of Latin grooves to get your hips swinging (‘Wild Wrld’), light touches of shimmering indie (‘Underwater Boi’, ‘New Heart Design’), and a healthy embrace of piano for a melodic cherry on the cake. That’s not to mention the two collaborations with Blood Orange, aka Mr Indie Exploder himself, Dev Hynes (‘Alien Love Call’, ‘Lonely Dezires’).

“Before I even knew Dev, that’s something that I always admired,” Brendan mentions on Dev’s musical elasticity. “I saw the way that he operates and it kind of made me think I could see that connecting of the dots happening a lot of times, and the kind of true love for making things, not necessarily…just kind of in a free way. I think that’s probably why I became such a big fan.”

Both as an individual and as a band, it must take strength to take such ardent strides. “There’s always some sort of level of sensitivity to try to make something that can be connected to,” Brendan admits. “Everyone has a different frame of reference for music, and how they hope for bands to do certain things.”

The key in Turnstile’s eyes is just being who they are, admittedly a fact that most bands tote when it comes to releasing an album, but you can’t help but buy into their version of it. Especially when they’ve had to break through the surly world of hardcore, which can be, at best, unforgiving, and at worst, isolating.

“The important thing for us has been maintaining just who we are as people and musicians,” he muses. “I think if anything, the hardcore scene allows freedom to be who you are; musically express yourself in a way that sometimes doesn’t always fall into a perfect music category. It’s less about the sound of a band and more about the idea and the culture that works around whatever you’re doing.”

The reality of knowing that you can’t please everyone, so why even bother, is one that’s very real to Turnstile. Even Brendan knows he can’t connect to every piece of music committed to tape, but the difference for him is that it lies in that grander image, that higher power of looking at something for its resonance. “I always appreciate finding things where I feel like it’s something that is true to that group or whoever it is,” he says. “This helps to maintain that idea.”

Thriving within said idea, the components of Turnstile aren’t shy of hard work. Not content with being a part of this blistering group, they’ve all got their hands in equally as rambunctious projects. Particularly Brendan, whose outings always embark on the adventure of experimentation, often taking up roles away from his front and centre positioning. But this taste for excursions often comes with a price.

“With every album I’ve ever been a part of, there’s always a lot of uncertainty, and in some ways a little insecurity,” he explains. “But it’s always in the back of your mind because a lot of times, it’s going with your gut making a song in the first place. If you trust that, that’s the most important thing, but with anything, it comes with exposing yourself to a certain level of vulnerability. I think that’s the thing that keeps things exciting and keeps us wanting to make music in the first place.”

“Sometimes that can be dangerous,” he admits to the flip side. “You try it out, and it doesn’t work at all because of one reason or another you can’t explain. There are some things we’ve made before where the idea feels amazing, and before it’s even a song, we play it one time live, and after the show, suddenly we can never play that again. It didn’t work, and I don’t know why it didn’t feel right. And then there are other things that just click. It’s not necessarily having a formula, but just chasing anything that can click for us. Getting together and if it clicks, it’s probably worth embracing and trying to bring to life.”

As in life, there’s only so much you can do. These higher powers that drive us into loving or hating certain things are wont to have their way. Knowing that there’s only so much you can do, and especially as a band, never knowing if you’ll get to make one more album or ten, and what they’ll sound like, leads Brendan to the Turnstile ethos: “It’s unplanned, a natural process of letting things happen as they will.”

Barreling down their highway, grabbing the things they need along the way, and the occasional hitchhiker too, Brendan affirms, “There’s no end destination either. Every goal is not like an upward movement; it’s like a side to side or forward movement that, as long as it feels like something, as long as I feel like that ball is rolling, it’s just like, appreciate existing in it, you know?”

Taken from the September issue of Upset. Turnstile’s album ‘GLOW ON’ is out 27th August.