Big Scary Monsters’ virtual pop-up store is kicking off today (Monday, 27th July) with exclusive merch and releases, plus ‘instore’ performances from the likes of We Were Promised Jetpacks, The Get Up Kids, illuminati hotties, Kevin Devine, Martha, Into It. Over It and more, all in support of Black Minds Matter UK and #saveourvenues. To celebrate the event, label founder Kevin Douch has popped in for a (virtual) chat to tell us what it’s all about.

Hi Kev, how’s it going? Are you all doing ok through lockdown?
Hi Upset! We’re all doing pretty well, thanks. We’ve so far all escaped getting ill or having any family members or close friends suffer, and enjoying easing back towards some sort of normalcy. Would love a change of scenery though!

This virtual instore sounds fun, how long have you been working on it? What sparked the idea?
We began the pandemic in our Brighton Popup back in March, which we decided to shut early when it became evident how bad things were becoming. We turned that into an Instagram-based store, taking orders via DMs, borrowing envelopes from our friends at Small Pond and sending records straight out to customers or driving round Brighton dropping them off ourselves. After that, we gave everyone a week off to adjust, and I think that was when we all started coming up with various ideas for things to do and ways to try and support others. We love opening these popups, and with no obvious date in sight for our next “real life” one, I suggested we build a virtual experience. One of our staff (naming no names) said it might be too ambitious and that was it for me, we absolutely had to do it! That was probably around two months ago, and we got straight to work. We roped in The Graphic Bomb to design the images (with a fairly close to the bone brief of “a classic record shop but the world’s fucked”), Andrej our web developer built it, and then we just got going on sorting the instore videos, coming up with new products, looking around to see what old vinyl variants we’ve got left, and brainstorming other little touches to try and bring as much of what we do in normal times to the internet.

Did you get an enthusiastic response from bands?
Yeah! The bands have all been awesome, and I think 90% of the ones we asked managed to put something together, which is incredible when you think about everything that’s going on right now.

What sort of challenges have you had to problem solve in putting this together?
I don’t think there’s been any particular stand-alone challenges, nothing we couldn’t handle at least, but the scope of the project was quite overwhelming at points. We’re a very organised team though with lists and spreadsheets everywhere you look, and everyone has been awesome at bringing their own talents to it, whether it’s Josie wrangling bands, Connor editing the videos and creating weird little interludes (you’ll see), Dave devising marketing plans or Katie speaking to lovely press like yourselves to help spread the word. At the time of writing this, we’re into the very final stages. We spent much of yesterday uploading test videos and tweaking little graphics, and today we’re finalising stock ready for the grand opening. I’m nervous but excited. 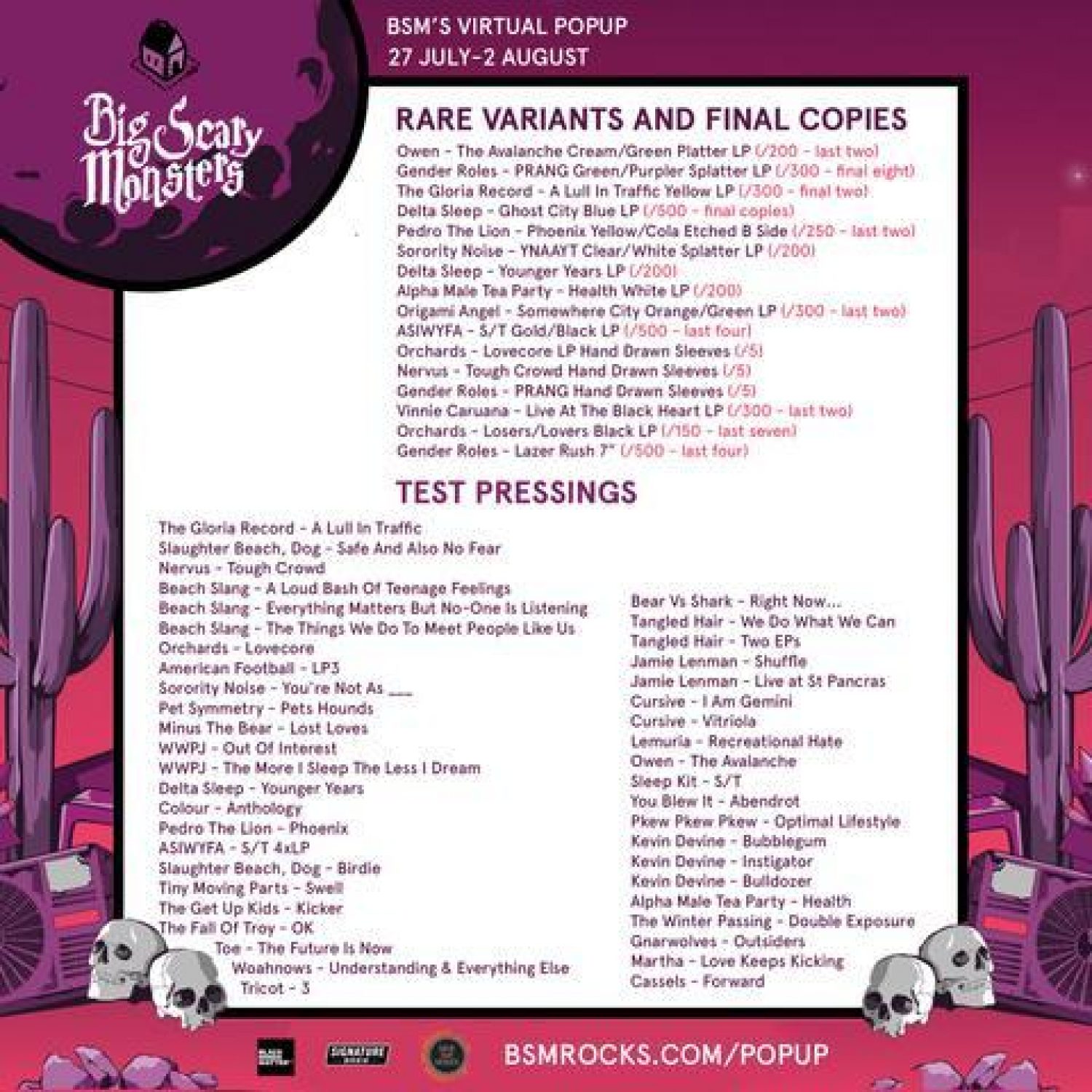 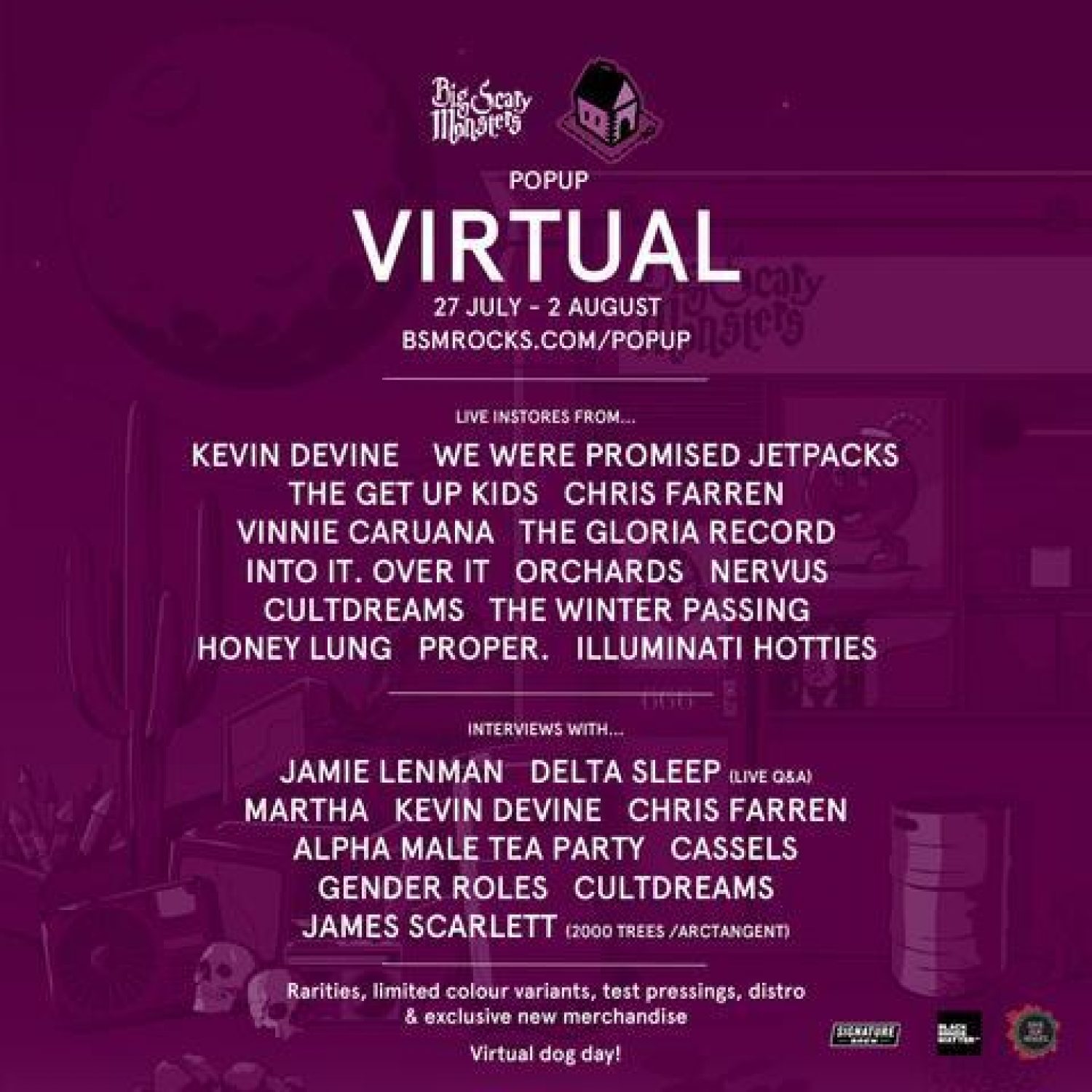 Having special vinyl and rarities available is fun, do you have any personal faves on offer?
We asked Orchards, Nervus and Gender Roles to each hand draw 5 sleeves for their own LPs. To be honest, I’ve only seen Gender Roles’ ones so far (and they’re as weird as you might expect), but I’m sure they’re all awesome, and I love how totally unique they’re all gonna be. We’ve also got a bunch of test pressings (again, all limited to just 5 copies each) and dug old some old favourites like the final copies of And So I Watch You From Afar’s 4LP behemoth reissue plus some lovely coloured vinyl from Delta Sleep, Owen, The Gloria Record and a bunch more. Also gotta give a shout out to our new t-shirt design because it’s very cute and all of the proceeds go to #saveourvenues and Black Minds Matter UK.

What’s this virtual dog day about?
Haha, so this is one part of the plan we had to sadly scale back a little as we just ran out of time. We had a dog day in our first popup in London back in January 2017, and it was awesome! At one point, there were 10 tiny pups swarming around people’s feet while they browsed, and we wanted to bring something like that back. Now though it’s just gonna be a curated playlist of awesome dog videos to watch while you shop, which is still fun but know that when we’re back in a physical shop, we’re gonna be opening our doors and demanding to see lots of lovely pooches again!

It’s lovely you’re raising money for charity too, what brought you to Black Minds Matter UK and #saveourvenues?
They’re two causes which have been front and centre for us and lots of people over recent months. Josie’s housemate and a very good friend of all of ours manages The Lexington, so we’ve been hearing about the worries and struggles for venues from the beginning, before lockdown even began. The #saveourvenues campaign has been amazing. We and so many of our bands have been donating to it along the way and as we always look to partner with a charity at our popups, they were our first choice. Black Minds Matter UK was then an organisation we became aware of and again something we’ve all been donating to personally and wanted to do more. We feel they’re representing a very important part of the current BLM conversations and we have other ideas and initiatives which tie in with this for the future, too.

What else are Big Scary Monsters up to at the mo?
Too much, to be honest! Since lockdown began, we’ve pushed a couple of releases back, pulled a couple of others forward and created new campaigns to try and support some of our artists who were struggling. So there are new records just out/coming soon from Jamie Lenman, Illuminati Hotties, We Were Promised Jetpacks, Into It. Over It, Owen, The Gloria Record, Delta Sleep and loads more. We opened a Q&A with fans, trying to help people who were looking to get into the industry in some capacity, or artists who were unsure about what steps to take next. We designed a colouring book, rebuilt our website and launched a membership area called Family Friend (bsmrocks.com/familyfriend), where people can sign up for free to access exclusive downloads, discounts, competitions and more. That idea expands at the end of the year into something which will really change the fundamentals of how we operate, and I’m so excited for it. On top of that, we’ve signed some new bands, and spring 2021 is looking like the busiest period we’ve ever had, so there’s lots of planning and prep going on behind the scenes ready for that, with a hopeful eye on the return of touring and potentially a real-life popup shop or two. Oh, and I built a bar in my garage ready for any second wave lockdowns!

Visit bsmrocks.com/popup to join in.